William A. Shea Municipal Stadium, usually shortened to Shea Stadium, is an American baseball stadium in New York City. It is the longtime home of the New York Mets Major League Baseball club, and one of the oldest ballparks in the National League. It is located in the Flushing section of Queens, on Long Island. The stadium is to be replaced in 2009 by Citi Field, which is currently under construction.

Shea Stadium is named after William A. Shea, an attorney who was instrumental in acquiring a new team for New York following the city's abandonment by the Giants and the Dodgers in the 1950s. Appointed chairman of the Baseball Commission by then New York mayor Robert Wagner, Shea first tried to get the Cincinnati Reds, the Pittsburgh Pirates, or the Philadelphia Phillies to move to New York, but had no luck. He then tried to organize a third major league, the Continental League, in 1958, with a franchise for New York, but the league died before a single game was played. In 1960, National League owners decided to expand to 10 teams and awarded franchises to Houston and New York. There were rumors that New York would be rejected unless it guaranteed construction of a new stadium. At Shea’s suggestion, Wagner sent telegrams to each owner with such an assurance, and the Mets started play in 1962.

Originally, the Mets were to play only one season at the Polo Grounds, the former home of the New York Giants. However, construction of the new ballpark fell behind schedule. Shea Stadium cost $28.5 million to build and took 29 months from its groundbreaking on October 28, 1961, to its dedication on April 17, 1964. It was originally to be called Flushing Meadow Park, but a movement was quickly launched to name it in honor of Shea. The stadium contains 24 ramps and 21 escalators. It was also the first stadium capable of being converted from baseball to football and back using two motor-operated stands that moved on underground tracks. Shea Stadium is the noisiest outdoor ballpark in the majors because it is in the flight path of La Guardia Airport. The story goes that when the city scouted out stadium sites in 1962, they went during the winter, when flight paths into La Guardia are different, so they never anticipated the aircraft noise. 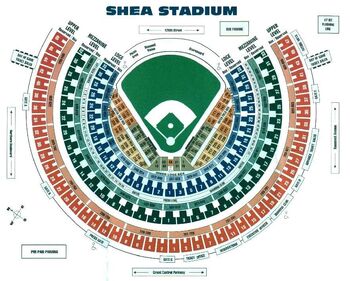 Retrieved from "https://armchairgm.fandom.com/wiki/Shea_Stadium?oldid=169213"
Community content is available under CC-BY-SA unless otherwise noted.