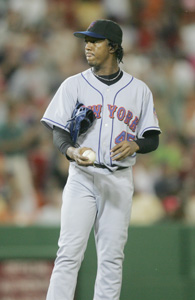 Pedro is the smartest player to ever play the game. What makes him so great is how he knows how to get a player out of their zone and into his. Take last week’s contest against the Nats for example. Every time a batter came up to the plate against Martinez they were shitting their pants. They were so scared that Pedro was going to attempt to brush them off, causing them to play Pedro’s game and not their own.

Dale Earnhardt owns the title "The Intimidator" but I think it’s time to pass it to Pedro.

Written By Jeff at http://thesportspage.blogsome.com