Livan Hernandez is a freak of nature. For six straight seasons, he has thrown between 216.0 and 255 innings. Still, the wear on his arm has not shown, as he goes out and contributes his sub-4.00 ERA to the team year in and year out. Last year's BA on Balls in Play of .315 was higher than his normal rate, which helps to explain the jump in ERA from 3.60 to 3.98. Also, his K rate has dropped over the last few years. If these two revert back to his previous levels, expect a low to mid-3.00 ERA. In 2005, 27-year-old John Patterson broke out in a huge way. The pitcher with a career 5.04 ERA prior to 2005, dazzled the league with a 3.13 ERA by cutting his BBs, maintaining his strong K rate, and handling his HR problem. As long as he stays in RFK stadium, this season or something very close can be repeated. After these two, the rotation heads south quickly. Ramon Ortiz has a career ERA of 4.72 and posted a 5.36 ERA in 2005. His main trouble of giving up HRs (34 in 171.3 IP last year) will be helped by the move from Cincy to Washington. On this move alone, Ortiz's ERA will drop below 5.00 and maybe below his career mark; however, expecting him to pitch a full year without any injuries appears to be an impossible feat for Ortiz. At the #4 starter, Tony Armas also owns a career ERA over 4.00 (4.32). Looking at his line from last year reveals all of his problems. In 100.3 IP, he let up 100 hits, 54 BBs, compiled only 59 Ks, and let up 16 HRs. A typical 9 inning start for Armas would look something like a 9 hit, 5 BB, 5 K, 1 or 2 HR game performance. That's not what I would call impressive. Jon Rauch may, just might, be able to contribute; although, it probably would not be for the full year. It has been years since he has pitched well over 100 innings in a season, so Rauch will wear out or get injured at some point due to the increased workload. However, he has a strong K rate and is not bothered by the HR ball; he sits a decrease in his BB rate from breaking out. Whether or not he addresses this problem determines which side of 4.00 his ERA ends on. Before the loss of Luis Ayala for the year, this bullpen was exceptionally strong and deep. Now, they have a top-of-the-line closer in Chad Cordero (1.82 ERA in 2005), a lefty set-up man in Joey Eischen (3.22 ERA), a righty set-up man in Gary Majewski (2.93 ERA), and an old lefty in Mike Stanton. Still, the bullpen remains better than most teams in the league. 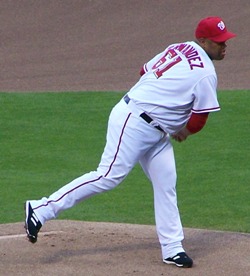 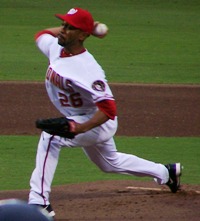 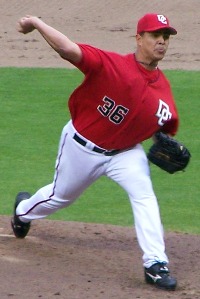 Whether or not Alfonso Soriano's name will be penciled into the lineup for the Nats' this year remains a mystery. His bat in the outfield no longer looks nearly as impressive as it does at 2B nor provides as big of an advantage. Soriano refuses to move to the OF so I don't see that being an issue. At 2B, Vidro is a below average defender, but Soriano may be the worst defensive 2B you will see. They should consider moving Soriano to SS, replacing the pathetic bat of Christian Guzman and dealing with the hit they take defensively (not that Guzman was all that good on defense himself). Jose Vidro can still hit adequately for a 2Bmen but his offense has declined over the past few years and odds are he will end up on the DL again this year at some point. Last year, Nick Johnson provided great value both offensively (.887 OPS) and defensively. His OBP is a lock to climb over the .400 mark again. Jose Guillen provides adequate power (24 HRs) and, overall, is above average for a corner outfielder. At 3B, the Nationals have a future star and their biggest potential for superstar production this year, Ryan Zimmerman. A realistic projection would place him around 18-20 HRs, a .280 Avg, .340 OBP, and a .450 SLG. These numbers could easily be exceeded but, considering they play in a pitcher's park, are impressive at this level. Coupled with above average defense, Zimmerman could become one of the most valuable players in the league by his peak. At catcher, Brian Schneider is the definition of average, offensively. Defensively, he provides solid glovework. In CF, Ryan Church hits the magical age 27 season, following an .819 OPS 2005 campaign. That production was in only 268 at-bats. If he can carry that out for a full year, that would be considered a breakout. The lineup ends on a sour note. Cristian Guzman was one of, if not the, worst players in the league last year. His line of .219/.260/.314 tells it all. His OBP was not even an acceptable batting average. To multiply his negative value, Guzman's defense dropped from gold-glove caliber in Minnesota to below average in Washington. I wonder if he struggled adapting to the change in playing surface. Will he rebound this year? Yes, but only because it would be impossible to be any worse. Just removing him from the lineup and replacing him with anyone, even the bat boy's sister, could only help this team, and probably boost ticket demand. Overall, this lineup does not appear to have a superstar they can rely on performing this year; instead, it is a group of average hitters with one black hole in Guzman. 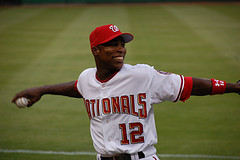 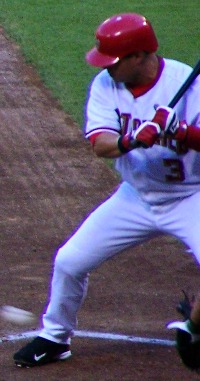 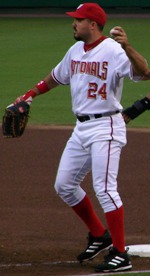 Projection: 75-87 4th in the NL East...This is not a terrible team, but they don't have what it takes to compete with the Mets, Braves, and Phillies yet.