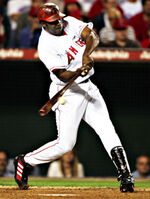 Vlad has one of the most interesting swings in baseball history. He is described as a "free-swinger", yet is able to maintain a .325 career batting average. Depending on personal opinion, the swing has to be either the best or worst swing ever. But all that counts is that the swing works. See more Halos Players


The 2002 team was the only team that has ever yet been able to deliver a World Series Championship for this Southern California franchise.

With the off-season additions of Torii Hunter and Jon Garland, the Angels look to solidify their place on top the division by repeating as division champions in 2008.

Rookie of the Year

Retrieved from "https://armchairgm.fandom.com/wiki/Los_Angeles_Angels?oldid=153901"
Community content is available under CC-BY-SA unless otherwise noted.