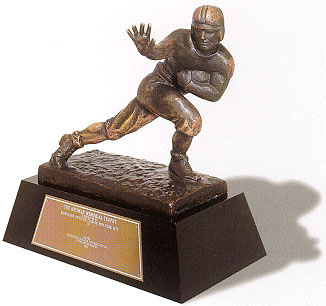 The idea of awarding college football's outstanding player was conceived by the Downtown Athletic Club, formerly of south Manhattan. The first presentation was made following the conclusion of the 1935 season.

Frank Eliscu was picked to create the trophy, which the DAC wanted to be a statue of an athlete as a opposed to a cup-style trophy. He selected Ed Smith as his model. A replica was then sent to Jim Crowley, one of the legendary Four Horsemen of Notre Dame and then-head football coach at Fordham, for inspection. After he and his players gave it their approval, it was converted into a plaster cast.

The cast was then presented at a dinner at the McAlpin Hotel on November 16 to Coach Elmer Layden and the 1935 Notre Dame team for a final inspection before the finished product was finally cast in its statuary bronze form. The team gave its approval, and the trophy was completed.

The first award, originally named the DAC Trophy, was given to Jay Berwanger on December 9, 1935. It was renamed the Heisman Memorial Trophy in 1936 as a tribute to John W. Heisman, who died that same year.

Retrieved from "https://armchairgm.fandom.com/wiki/Heisman_Trophy?oldid=91752"
Community content is available under CC-BY-SA unless otherwise noted.