ArmchairGM Wiki
Register
Don't have an account?
Sign In
Advertisement
in: Opinions, Opinions by User Kenrick Thomas, June 22, 2009,
and 16 more

The rain couldn't save the New York Mets as they suffer another defeat against the Tampa Bay Rays, 10-6. 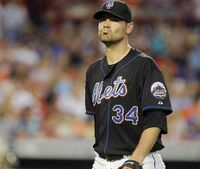 Mets manager Jerry Manuel believed his team could score against the Rays bullpen, but he was proven wrong.

"I felt that offensively we could still score on their bullpen," Manuel said. "I was obviously wrong about that."

"If you don't execute your pitches, they're going to hurt you," Pelfrey said.

"It was good to get a little redemption for myself," Schneider said. "But what I I'm really trying to do is just have a good at-bat."

Rays center fielder B.J. Upton finished with three runs and four hits. Carl Crawford, the left fielder, had two runs and three hits. Rays manager, Joe Maddon, was happy with Upton's home run and he believed that was the turning point during the game.

"B.J.'s home run was magnificent," Maddon said. "Again, you get that momentum coming back your way and we just worked our way through it after that."