Howard Schultz, the former Sonics owner is trying to save face by attempting to sue the current owners of the Seattle Supersonics for alledgedly breaching a condition of the sale to make a "good-faith effort" to keep Seattle's oldest pro sports franchise from leaving town, according to Seattle-area media reports. Schultz, who sold the Sonics to an Oklahoma City-based group led by Clay Bennett, will not seek monetary damages, but wants the team back, according to his attorney, Richard Yarmuth.

The lawsuit, expected to be filed in the next two weeks, comes after the city obtained and made public e-mails among members of the current Sonics ownership group, in which they are seen privately discussing a move to Oklahoma City at the same time they were publicly pledging to continue "good-faith" efforts to remain in Seattle. But while this is all and good, if Joe Schmo was able to get his hands on the emails and release it to the public how the hell was Schultz unable to prior to the sale. He should've knew what he was getting himself into in my opinion.

But while I see no just way in saving the Sonics, Schultz is saving his reputation and Starbucks by making this half ass attempt to come out as the good guy. Point is, contrary to Seattle fans beliefs its Bennett's property and he is free to do whatever the hell he wants with his property. Regardless of the fan outcry, the NBA is basically a bunch of owners and their properties and just because a fan buys a jersey or season tickets there is no real obligation to that fan.

This whole situation reminds me of the cliche family sitcom episode when they sell the house and then someone has a change of heart and they do some elaborate scheme to try to weasel the house back they fail but then the owners feel bad about it and see how much they love the house and decide to sell it back, even though they bought it fair and square. Then the family hugs and vows never to do it again, until the series finale which almost always involves moving out of some sort. But as you may know this is the real world and problems aren't solved in 30 minutes, too little too late.

Personally I don't find Schultz to be sincere, if some random guy was able to get his hands on the emails and release them how the hell does a billionaire lack the resources to research and find out who the hell he's selling his property to. There are plenty of people that knew Bennett was moving the team the second he offered to buy the team but Schultz was the simple little billionaire who didn't think. If he cared so much about that team he would've realized that Bennett was not the guy to hand his team over to, thats about as intelligent as letting Michael Vick adopt your dog. Schultz is already a billionaire I don't see why he was so money hungry he took the dough without thoroughly thinking

While I'm not a Sonics fan, and not as invested in this issue as some of my fellow AGMers, I simply think that this whole situation has gotten out of hand. What was really a business transaction (No one seemed to care about the Sonics, talk about your wanting what you can't have), is turning into lawsuits, bitter fans attacking a city they know nothing about and of course two loyal fan bases one of which may be turned away from the NBA forever. But I urge Sonics fans, let it go, you can root for the Oklahoma City Trizzters or you could find a new team to follow, or pull a Homer Simpson and have a hunger strike...me hungy...lol I'm so about to find that episode online but sorry to say it's over. Don't worry you can have the Clippers in a couple years..... 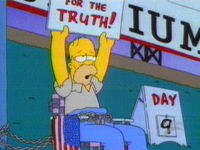