ArmchairGM Wiki
Register
Don't have an account?
Sign In
Advertisement
in: Opinions, Opinions by User Trecole696, March 4, 2009,
and 13 more

The Giants battled back for their first comeback win of the exhibition season on Tuesday, as they were led by a couple of guys who the team is expecting big things out of in '09.

Randy Johnson struck out 7 batters in 3 innings as he faced his former employer (D-Backs) for the very first time. The lefty has now gone 5 innings this spring, allowing 1 run on 4 hits and 1 walk while striking out 10 batters. Johnson made it very clear coming into 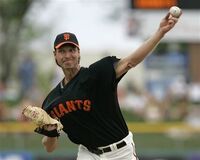 spring training that he was feeling better than he had in years at that point and he was extremely excited to see how things were going to go because of it. I know it's only spring training, but the Unit has looked like the Unit of 5-10 years ago early on in spring. He had the place buzzing when he threw BP and bullpen sessions during spring practices, and apparently he isn't lying. Now I'm not expecting a full fountain of youth for Johnson here, and it's still kind of unclear how his back is going to take to pitching those cold nights on the water in San Francisco, but if he holds up for 180-200 innings, he's going to be a force to be reckoned with, just ask the D-Backs hitters that faced him Tuesday. You can also ask the D-Backs pitchers about young Pablo Sandoval, who was also a big part of Tuesday's come back victory. Sandoval hit his first home run of the spring, a 2-run shot in the sixth inning, part of a 4-run inning that helped the Giants tie the game. There has been some around the organization that have suggested moving Sandoval into the cleanup spot and Molina to the fifth spot, so it will be interesting to see what happens if Sandoval keeps on driving in runs. While the starting pitching and offense continue to be bright spots, the bullpen and occasional spotty defense have continued to be a negative. The defense was atrocious a couple days ago for Matt Cain as they made 3 errors behind him in his 1+ inning of work. The starters have been good for the most part, but potential bench guys like Eugenio Velez, Juan Uribe, and John Bowker, among others, have made 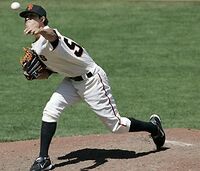 some costly mistakes. In the bullpen, Jack Taschner, Keiichi Yabu, Sergio Romo, and Alex Hinshaw have really dug themselves in a hole as far as making this team out of spring. All four, especially Taschner, Romo and Hinshaw, were favorites coming in, but Taschner has walked 5 batters and allowed 4 runs in 2 innings while Yabu has allowed 6 runs on 7 hits and 3 walks in only 2 innings. Hinshaw has allowed 2 jacks and has given up 4 runs in less than 2 innings pitched and Romo (who reported arm stiffness Tuesday and is being held out 10 days) has also given up 2 bombs while allowing numerous baserunners in just over an innings pitched. Now these guys are only going to get about 10-12 total innings this spring so they really are already behind the 8-ball here as some other guys are flourishing. Rule V draftee Luis Perdomo allowed a run on Tuesday for the first time in 3 outings, but he continues to look pretty good and is throwing strikes. Other guys who aren't favorites but could force the issue are Brandon Medders (4 IP, 0 hits/runs, 2 BB, 3 K's), Justin Miller (2 IP, 0 hits/runs, 1 K), and Osiris Matos (2.1 IP, 0 hits/runs, 1 BB/K). As a matter of fact, if I had to construct my bullpen today, on March 4th, it would probably go like this:

Extras: I found it surprising that Juan Uribe led the team in at-bats through the first week of spring training while guys like Jesus Guzman (3/6 with 2 doubles and 2 RBI) are itching for opportunity but aren't really getting it.
Randy Winn is still looking for his first hit of the spring while Travis Ishikawa is still looking for his first long ball and RBI since the Cactus League opener.... Also, Emmanuel Burriss and Kevin Frandsen are really going neck and neck in the battle for the starting second base job so far this spring. I am not a big fan of ever going with a platoon, but if both of these guys are hitting over .400 all spring and playing good defense, then this battle might carry over into the regular season.