ArmchairGM Wiki
Register
Don't have an account?
Sign In
Advertisement
in: Opinions, Opinions by User Trecole696, January 20, 2010,
and 14 more

In a move that really came out of nowhere, Brian Sabean and the Giants have re-signed Bengie Molina to a one-year, $4.5 million to return to San Francisco for the 2010 season. Molina rejected a better offer from the Mets to return to the Giants, apparently showing who he thinks has the better chance to win in 2010.

Earlier in the offseason, Brian Sabean made it clear that the Giants wouldn't be entertaining the idea of bring Molina back. However, with the way the market has shaped up, and the wacky contracts that have been given out to catchers (2 year deals to guys

like Pudge Rodriguez and Jason Kendall), plans changed. The catching market wasn't very lucrative to begin with, and the only other starting catcher options outside of Molina were Rod Barajas and Yorvit Torrealba. Molina is so familiar with the Giants' pitching staff, and he will probably provide more offensively than both Torrealba and Barajas, and I think those were the two reasons that ultimately made up Sabean's mind. Molina was the best option left on the market as far as catchers go, and will enable the Giants to ease Buster Posey into mix rather than throwing him into the fire. Although I was really excited to see Buster Posey get significant playing time early in the 2010 season, I certainly see the logic in bringing Molina back. They obviously feel Posey isn't ready to handle the full load, and judging by what he showed at the end of '09, he really isn't. I don't love this signing by any stretch, but like the others this offseason, I can't really complain about the terms of it. All things considered, the Giants are a stronger team than they were at the beginning of the day, and that's the most important thing. The Giants also have begun arbitration cases with their eligible players. Sabean did avoid arbitration with Jonathan Sanchez by signing him to a $2.1 million deal for 2010, which I think is a very fair deal for both parties. Now Sabean can turn his focus to 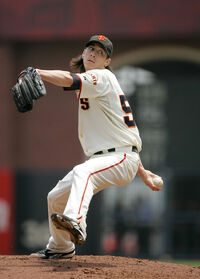 Tim Lincecum and Brian Wilson. Lincecum's party submitted a figure in the neighborhood of $13 million while the Giants countered with $8 million. I'm actually a little surprised the Giants didn't offer at least $10 million, but I think Lincecum will still end up getting closer to the $13 million he requested than what the Giants offered. It looks like he's going to indeed break the arbitration record of $10 million set by Ryan Howard. I think the Giants should just give him the $13 million and keep "The Franchise" happy cause he's worth about double that to the Giants anyway. The Giants and Brian Wilson were much closer in their case. Wilson submitted 4.85 million and the Giants submitted an even $4 million. I'd guess the Giants will go ahead and give him $4.5 or so for next season. And with these moves, it looks like the Giants offseason work could be winding up. They've got their catcher now, and unless they have a right-fielder or a number five starter fall into their lap in the next couple weeks, I think they're pretty much done, outside possibly adding one more relief arm.