ArmchairGM Wiki
Register
Don't have an account?
Sign In
Advertisement
in: Opinions, Opinions by User Smmonroe2, March 19, 2008,
and 4 more 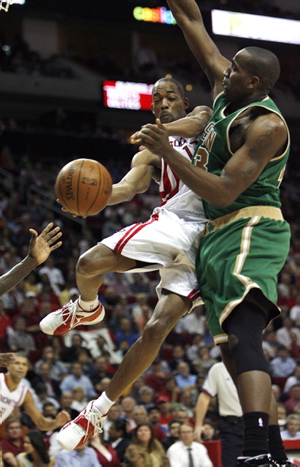 Missing Ray Allen, the Celtics had several players step up for them. The big guns, Kevin Garnett and Paul Pierce combined for 44 points, while Leon Powe came off the bench and put in 21. The green also did a great job on the defensive side of the ball as well.

They came into the game knowing that they would have to stop Tracy McGrady and they did just that, holding him to just eight points, while Yao Ming’s replacement, Luis Scola, had a team high 15.

The Celtics, who have clinched a playoff berth, improved their conference lead to five games over the Detroit Pistons, while the Los Angeles Lakers are able to pull into a tie with Houston.

The Rockets will travel to New Orleans for a game on Wednesday, while Boston will stay in Texas for a match up against Dallas on Thursday.