ArmchairGM Wiki
Register
Don't have an account?
Sign In
Advertisement
in: Opinions, Opinions by User BigPPup, February 17, 2009,
and 56 more

Article:Putting the ALL Back in STAR 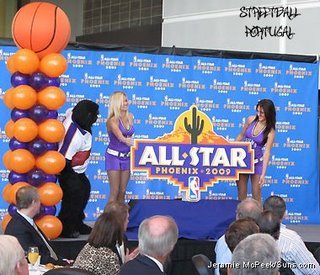 Everyone knows that here at Walker-Sports we love our readers, because without the fans, we would not be here. That's is why we have searched the globe far and wide to find a basketball analyst who would be up to our standards. Now I am proud to announce we have found our guy. Enter Thom Wallace, our new basketball specialist. Try to take it easy on him, it's only his first time here at Walker-Sport.

Now that the little half time show is over and everyone's gotten to pimp their wares and companies at the All-Star Game, lets get to some real basketball. The All-Star game has turned into a yawn of an afterschool special with skinny kids scoring 47 points in a walk and toss rookie/sophomore game, dunk competitions with pre-fabricated props, and Kobe and Shaq and sharing family value oriented co-MVP honors (so sweet) - gag. Thank the basketball gods one institution is relatively safe from demise and is prepared to return some semblance of respect to round ball arenas across the country; March Madness is right around the corner.

Thanks to the NBA we are getting some early drama too, before the college kids start showing what real basketball players look like, with one of the most active trade deadlines we've seen coming up this Thursday. Why are so many teams looking to trade around and pass along marquee players? All of this player-go-round trade fest is tied to the simple quest for one simple concept that NCAA National Championship teams understand better than anyone; Chemistry. Players don't win games: teams do. Some players make money for teams, but championship teams make more money. There's no disputing that. It's a fact. 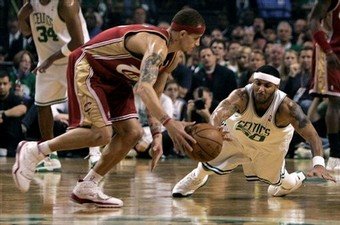 Sure, the Celtics last year had three of the best players in the last decade on their team. But the unknown we all watched for last year was whether or not they could come together as a team, and if 13th man on that team could dress for each game; chemistry. Show me one clip where Sasha Vujacic dove for a ball in last year's Finals, and while you're looking for that clip you can think about, Kendrick Perkins, Tony Allen, and Eddie House keeping the Celtics together throughout the playoffs. The Celtics may have had three of the most talented players in the league in Kevin Garnett, Ray Allen, and Paul Pierce, but the others on the team poured more of their hearts into the ring mold than any one else, and the trio was made better by it. And that's what every GM wants, or if I were a GM, that's what I'd be trading for. Isiah Thomas was nothing without Dennis Rodman, Bill Laimbeer, and Rick Mahorn (Joe Dumars is a given). Michael Jordan was nothing without Scottie Pippen, Horace Grant, and John Paxson (role players). Larry Bird couldn't fly without Kevin McHale, D.J., and the Chief. Magic had no spell, without Michael Cooper, James Worthy, and Byron Scott. The list goes on. NBA players, even the best of them, need to learn how to be role players, forget role models, just role players. The King has got that figured out. That's why LeBron will out pass, literally out pass Kobe, as the best player to play the game when we look back. Nothing wrong with scoring, but statistically speaking, its better to spread the wealth and then get the ball back if you're a star. Since I don't have the links to all the inside scoop like Mark Stein over at ESPN, let's look at some of the players on the block and explore where they'd fit, in the chemistry equation (try your own hand at ESPN’s Trade Machine - );

Amare Stoudamire – Chicago I don't know how to do the trade cap math here, but if Obama can get a $800 billion stimulus bill passed, there's hope that the Bulls and Suns can figure out how to make this happen.

Plus Chicago's got a lot of chips to play with, without losing too much talent. Here's a town that respects a good team more than a good player. Sure, the Jordan era was a lot about god-worship, but Michael knew what he had around him. Now the deck is full again in Chicago and their missing one piece. Ben Gordon, Derrick Rose, Kirk Hinrich, Tyrus Thomas all in Chi-Town now. Move one or two (Thomas and Larry Hughes), and put Amare into Chi-town and you've got yourself a dynasty, built on youthful team chemistry and passing with a lot of scoring at the end of it all.

Shaq (and Tyrus Thomas) to the New Orleans Hornets Bring back the local LSU boys. Send the big fella and LSU's most prolific scorer back to the big easy where they can let their roots flow and help the best point guard in the league, Chris Paul, show the rest of the league that the big fella still has it. You want to see break dancing. Paul and Shaq would be in the finals and the big fella would be downed in Mardi Gras beads. Trade works this way: Suns get Tyson Chandler and David West and in return send Thomas (acquired from the Bulls) and O'Neil.

Phoenix – Get Chandler, West, and Hughes. Not a bad deal all around for everybody. West is the biggest loss for the Hornets, but to get Thomas back, you've got to give something up, and West fills the loss of Amare. (I did check this trade on the Trade Machine and this deal is good to go).

Trade Stephon Marbury and Isiah Thomas back to Detroit That's right. Isiah Thomas and Starbury are too perfect for each other. They're both selfish and make the parent drama of an AAU team look like an episode of My Little Pony. Joe Dumars can settle them both out. Rasheed in NYC would bring respect back. At least 'Sheed is from a credible team based system like UNC and Philly's Simon Gratz. Keep the little guy too. You want chemistry? Nate Robinson's Seattle Rainer Beach grittiness is exactly the kind of thing young hot shots like Sebastian Telfair from NY need to learn from. A Robinson – Sheed one-two punch is the unlikely fire that will get the street-ballers of NYC back to respecting the pathetic NY squad, maybe.

Vince Carter – Flight School. Send him to Charlotte. Michael needs a good veteran that can fill the seats.

We all love high-flying Vince, but is a player really only worth his vertical? The Nets haven't been cut since Vince showed up in Jersey and I'm not sure if he's really worth all the mustard – Josh Howard from the Mavs or half the Spurs' bench? I don't think so. The Nets could use someone like Raymond Felton, Vladimir Radmanovic, or Emeka Okafor, straight up. Maybe then, Vince will go back to being the star ACC-look-to-pass-before-you-shoot (or take off from the foul line) player that he was at UNC.

The Wizards – Back to Baltimore for the rest of season. They could learn a thing or two going back to a town that actually respects the game. Somehow the District has decided that a guy with a bum knee that talks smack all the time and is forced to hit game-winning-half-court-pull-up-three-pointers is the person to worship. Change has come to D.C. so let's get moving back to the world where Gilbert Arenas (god bless his soul) is off figuring out how to set the world on fire somewhere else. Caron Butler (Big East), Antawn Jamison, and Juan Dixon (ACC) were raised right on east coast basketball with good team chemistry basketball as their foundation, where scorers, score and pass, and role players rebound and pass, and sometimes tip the ball in. So the basics are there, but Arenas needs to go. He is the bottleneck. D.C. is the Hollywood for ugly people, but that doesn't mean all these out-of-towners should steal our pride in east coast basketball. Send the team to Baltimore for the remainder of the season, and I guarantee they'll sell out the arena and the team will actually get some helpful advice from the brilliant basketball minds in Charm city rather than the mixed bag of regional allegiances that fill the empathetic hometown crowds.

Next installment; my predictions for NCAA March Madness.

Thom Wallace writes about the convergence of media, art, technology, and sustainability at www.thomwallace.com and contributes to Walker Sports when a great Baltimore basketball mind is needed!