ArmchairGM Wiki
Register
Don't have an account?
Sign In
Advertisement
in: Opinions, Opinions by User JTStally, October 10, 2009,
and 6 more 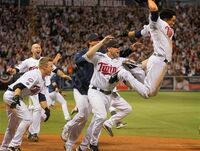 This past Tuesday, the Minnesota Twins sealed their fate to get battered by the Yankees in the playoffs by defeating the Detroit Tigers in a one-game tiebreaker.

I'm sure the evenness isn't surprising, considering these teams played evenly for 162 games. But, what is surprising is that MLB continues to use a system that obviously favors one team: the home team.

MLB made strides this year by finally implementing a system of on-field tiebreakers (the first head-to-head: the Twins held the season series over the Tigers eleven games to seven). In the past, a simple coin flip was used to determine the home team.

Can you imagine that?

You sign a multi-million dollar contract in December. You report to camp in late February. You start the regular season the first week in April. You play 162 games in roughly 180 days. And, the fate of your season is decided by 25 cents worth of George Washington!?

Ironically, last season, it was the Twins that complained about the coin flip, after they were eliminated by the Chicago White Sox 1-0 in a tiebreak. The game was played in Chicago, thanks to President Washington, despite Minnesota having won the season series against the Chi Sox.

Minnesota's complaints paid off this year. After the owners decided during the offseason to change the system to an on-field tiebreak, Minnesota got the home field they felt they rightfully deserved this year (for having a better head-to-head record against Detroit).

At least there's justification for the Tigers as to why they needed to go on the road, but let's not pat MLB on the back just yet.

But, PEDs are still rampant in baseball and many drugs aren't tested for. Major market teams (i.e. the Yankees) still outspend some small market clubs by about seven or eight times. And, the home team still gets more than its fair share of advantage in these one-gamers.

Don't get me wrong. There has to be some sort of system to determine the home field, and the system of having a one-game playoff is certainly more fair than, say, just taking the team with the better head-to-head record and sending it to the playoffs. And, obviously, someone must be dubbed the "home" team and bat last, and thus get the advantage.

However, there's a difference between being the "home" team and having "homefield" advantage.

And, here in lies the solution.

Let the Twins decide which of those two they want. As the team with the better head-to-head record (against the Tigers), Minnesota will have the choice.

Simply put, it can be the home team, or it can have the home field.

Some people might suggest a neutral site location, but, again, that provides an advantage to one team (which ever bats in the bottom of the inning) over the other. "Neutral" sites are also subject to location. How do you choose which "neutral" site to play at? In the case of Minnesota and Detroit, Milwaukee or either Chicago ballpark is an obvious selection, since all three are between the two cities. But what if it was the Padres and Dodgers? Or Red Sox and Yankees?

Los Angeles and San Diego could play at Angels Stadium. But, it's much closer to downtown LA than San Deigo, and does it really seem "fair" to play a "neutral" game at the ballpark of a team that calls itself "Los Angeles"!?

There's even more disparity between Boston and New York. The closest "neutral" ballpark to Boston is Citi Field in New York (home of the Mets). Anything else is either West or South of New York, which gives an obvious travelling advantage to Yankees fans. (Please don't count the Expo in Montreal as a viable option, the word "ballpark" should not be tarnished badly enough by being compared to that "structure").

Sure, you could have these teams play in some remote location that would require both fan bases to fly. But, how many Padres and Dodgers fans do you think are gonna fly to Denver to watch this one-game playoff!? Do you really want a game of this magnitude played in front of a stadium full of empty seats?

Some people might argue that the team with the better travelling fan base deserves the advantage, but if you read Sports Illustrated's well-done article on the Tigers and the economics in Detroit, or if you've paid any attention to this country over the last year, you'll know that's not a fair statement at all. Detroit fans barely have enough money to attend home games, let alone buy an expensive flight on short notice and rent a night in a hotel to watch a single baseball game.

So, let's neutralize the "neutral" field debate and get back to the main argument.

What's not to like about the "home" team playing at the other team's ballpark!?

This is about as fair as it's going to get, shy from going European soccer on the Major Leagues, and playing two games, one at each location, and, if the teams split the series using run differential or runs scored on the road or any of that hooplah!

This scenario gives one team the on-field advantage because it gets to bat last. As proven by two of the last three recent games being decided in the bottom of an extra inning, batting last can be a huge advantage.

However, whatever "advantage" batting last gives a team is washed out because the other team is playing at its own ballpark. As Lynyrd Skynyrd sings, "there just ain't no place like home."

Despite having to bat first, this team gets to sleep in its own bed, drives its own car, use its own clubhouse, hit in its own ballpark, cue up its own music, and, most significantly, play in front of its own fans. Teams tend to play much better in their own ballpark. This season, Boston, Tampa Bay, Detroit, and San Francisco all played at least 21 games over .500 at home, and under .500 on the road (similarly, Colorado went 51-30 at home, and just 41-40 on the road).

So, next year, the game ball's in your hand Minnesota? There's probably no way you'd give up your home comfort just to guarantee the last at-bat, is there? Then again, come the middle of the ninth inning in a tie game, you might be reconsidering your decision!

--Originally posted on the JTStally Blog --