During my radiology residency an interesting topic came up when we were looking at shoulder and elbow injuries. My teacher was a huge baseball fan and was doing some comparison studies with multiple pitchers. He actually had an x-ray of Nolan Ryan's shoulder and elbow and a few other MLB pitchers. We started comparing them to those of recent pitchers, kids, really any x-ray he had stored or any copy of that which involved a baseball pitcher. 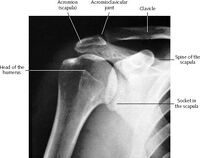 At the top of this x-ray a lot of the comparisons were being done with the AC joint (acromioclavicular joint): which is were the clavicle (collar bone) meets with the scapula. Injury to this joint is referred to as a "separated" shoulder, whereas a "dislocated" shoulder involves the ball and socket joint of the where the head of the humerus meets the scapula (Mel Gibson- Lethal Weapon).

Okay, so enough with the anatomy lessons. What's the point here right?

Well kids have growth plates like the x-ray shown above (knee- epiphysial plates) These allow the bones to grow until maturity and then they fuse together when growth has stopped. The bone from the arrows to the joint are NOT solidified and as hard as they will once be when you are an adult.

In the old days, kids were not limited with any pitching counts or which kind of pitches they were allowed to throw. Instead they just kept pitching, and pitching, and pitching, and pitching over and over again. When pain began they would typically just keep pitching and pitching and pitching. Well, when comparing the x-rays we noticed that differences could be seen in the old timers vs the newer cases. For example, the AC joint was more flattened and smoothed out (both the clavicle and the acromion) in pitchers like Nolan Ryan's and others. This would allow the joint to continue being used without developing any friction or increased irritation which would latter result in rotator cuff injuries, bursitis, or extreme cases of early arthritis. The flattening of the bones that made up the AC joint were done EARLY when they were a kid; before the growth plates fused and before the bone ossified to adult "hardness". So, in other words, the over pitching and non-limitations allowed the joints and bone to change and be altered to a perfect "pitcher's joint" when they were young, which fused and hardened, and stayed that way into adult hood; allowing them to throw over and over again without injury-- in other words the joint ADAPTED to what it needed to be in order to be placed under that stress. Same goes with the elbow.

Now today we have limitations we place on little leaguers and pitchers. They are only allowed to throw so many pitches, so many innings, not allowed to throw curve balls until a certain age, etc, etc. The theory is that they AREN'T placing ENOUGH stress on these joints to alter them and instead the joint grows like every other persons; a normal AC and elbow joint. When placed latter in the big leagues these joints can't handle the stresses placed on them (the AC joint and elbow weren't created to withstand these pressures) and they blow out early ending careers way too early.

Interesting theory right? However, 99% of the world, orthopedic surgeons, doctors around, are IN FAVOR of limiting numbers of pitches as they are saying they have never witnessed so many shoulder and elbow injures in young athletes. Reasons why the numbers are up? BECAUSE THE PARENT'S ARE NUTS and when a kid has any pain they run them into the doctor with fear of their future all-star injuring it further. In the old days, my dad would say "suck it up and rub some dirt on it" :) That is why they feel it is important to limit them and make them rest. Sounds good, sounds smart, sounds reasonable right? When it starts to hurt you STOP doing what makes it hurt and rest it. That's what any smart person or doctor would tell you.

So who's going to tell your kid to fight through the pain, keep throwing over and over again, start throwing curve balls early........ so you alter and change your joints into one that can later handle the stresses they will be placed upon IF they make it in the big leagues??

It's just like braces on teeth. Place them under stress so when the teeth grow and develop they grow straight with no overbite. Why not adopt the same theory with pitching?

It's been a pleasure. Enjoy reading this and let me know what you think.