The NFC West last year was perhaps one of the least exciting divisions to follow in the entire NFL. The only remotely successful team, Seattle, had their ups and downs during the season but generally had the division on lock by the end of Week 4.

There were many reasons for such non-parity.

The Rams were racked by injuries and were tasked with playing with a 'Replacement-esque' offensive line. Marc Bulger was sacked fifty times per game and Stephen Jackson missed much of the season due to injury.

The 49ers, such a trendy sleeper pick these past couple years regressed once again and Alex Smith flirted with having his name thrown in with Ryan Leaf’s. Having the worst offense in the league, combined with a mediocre (at best) defense eventually summed up to a not-so-great year for San Francisco.

Arizona, who showed a bit of promise last year, was still playing with Kurt Warner as their starter thanks to a disappointing and injured Matt Leinart. Although he guided them to an 8-8 record, Warner showed his age and the offense lacked the explosiveness it could have potentially had with Leinart under center. 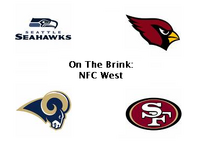 Going into this year, the hopes are high for each team. The 49ers have brought in Mike Martz to improve their anemic offense. The Rams are going into the season with a healthy Stephen Jackson, Marc Bulger and offensive line – all three things that make their offense scary. Seattle signed Julius Jones in the hopes he could be a big part of a potential committee at RB, although their WR situation at the moment is iffy. Finally, Arizona still has Larry Fitzgerald and Anquin Boldin on their offense and that’s essentially all that matters. Although they are hoping that this is the year that Matt Leinart finally realizes he is in fact a professional quarterback.

However, every team goes into the year with a positive attitude. If they didn’t than it would be scary, unprofessional and a bit pathetic. Thankfully, we the fans can be the realists and sort out who has a shot, who doesn’t and who probably should be the reason the NFL creates a minor league system.

The good thing is that every team in the NFC West is on a relatively equal playing field, save for San Francisco unless they make an extreme turnaround. It really could go a multitude of different ways and the season’s outcome, like every year, will depend upon a variety of factors.

A healthy St. Louis offense is a potent offense and even though they lost Isaac Bruce to the 49ers, the offense still has the ability to put up huge numbers especially if Stephen Jackson can remain healthy. With little to no pass rush last year, Marc Bulger did everything he could to will the team to a win but to no avail. Still, he looked impressive for a QB who was basically playing in the face of a constant pass rush and the threat of broken ribs.

The secondary should improve with the off-season signing of David Macklin and the defensive line will get an instant upgrade with the arrival of Chris Long. While the Rams defense wasn’t the worst in the league last year, it can use the help and if it can be at least average, the offense will take care of the rest.

The Cardinals proved last year that they are finally to be taken seriously… or at least somewhat seriously. Having gone .500 last year, the only way they can go up is to make the playoffs and breaking even again or anything less would generally be regarded as a disappointment. It all rests on the well-moisturized, hot-tub-loving arm of Matt Leinart (what, is that joke dead yet?).

The defense, like the Rams was mediocre last year but has been improved upon with free agency and the draft. The key to the Cardinals season is going to be whether or not Matt Leinart can step it up and if Edgerrin James can continue to at least be mildly productive. If Leinart gets injured or cannot step into the starting role well, Kurt Warner can only take them so far. He’s performed valiantly up until now but it’s time for Leinart to show what he’s got, if anything.

It came as no surprise when the Seahawks offense declined slightly when Shaun Alexander fell off the map. On a side-note, what exactly happened to Shaun Alexander? One minute he’s breaking the rushing touchdown record and the next minute he’s a free agent and no one wants to sign him. It’s all very weird if you ask me.

The Seahawks fortunately still have Matt Hasselbeck in his prime. Unfortunately, his receiving corps is awfully banged up and mediocre when otherwise. The running back situation is still up in the air with T.J. Duckett, Maurice Morris and Julius Jones all competing for playing time. The defense was a tad above average last year and should see rookie Lawrence Jackson from USC make a significant impact.

Lastly, we have the San Francisco 49ers who after the Dolphins were easily the worst team in the NFL last year. The offense was horrible. It was horrendous. It was every possible bad term you could come up with all rolled into one nasty word.

Mike Nolan has brought in offensive guru Mike Martz to try and help turn things around and more importantly, try and kick Alex Smith’s ass into gear. Martz, who is known for his quarterback mentoring looks to turn the 49ers offense around with his extremely complicated yet amazingly effective offensive system.

It may not be the strongest division in football, but the 2008 season should be an interesting one in the NFC West. The Seahawks, who are going for their fifth consecutive division title in 2008 look awfully vulnerable and both the Rams and Cardinals have realistic shots at ending that streak this year. The 49ers are the wild card in the whole thing and while they realistically don’t have much of a chance of taking the division, I wouldn’t put it past them to finally be the sleeper team the year that everyone’s given up on them as a sleeper team. It’s just how the NFL works.

Retrieved from "https://armchairgm.fandom.com/wiki/Article:On_the_Brink:_An_NFC_West_Preview?oldid=135971"
Community content is available under CC-BY-SA unless otherwise noted.