ArmchairGM Wiki
Register
Don't have an account?
Sign In
Advertisement
in: Opinions, Opinions by User Rawbeezeitz, July 27, 2009,
and 17 more

I’m not saying these guys are all bad people (although some of them probably are). I think the word “jerk” fits them to a T. These are players you hate, unless they’re on your team. And even when they are, you don’t love them, just what they do for your team. But 20 or 30 years after they’ve retired, everyone laughs about the stuff that used to make them fume. Their cheating becomes competitiveness. Their selfishness becomes determination. Their anger becomes a symptom of a sad sickness to be pitied by all.

In constructing this team, I tried to get players from different eras, and different kinds of jerkiness. Some of these jerks were more lovable and colorful as opposed to being downright vicious. Then I had to balance all that with their playing ability. It was not an easy task, but the point of lists like this one are to generate discussions. So disagree with my selections, and be as jerky as you’d like:

King Kelly was one of the first baseball superstars, with a career that spanned from 1878 to 1893. He was also one of baseball’s most eccentric players ever. He traveled with a pet monkey, lived in a hotel when he played for Chicago, and drank a lot. When he was sold to Boston, he spent all of his record $5000 salary as soon as he could, mostly on booze (which was the style for Irishmen of the time, I‘m Irish so I can say that).

On the field, he was a known cheater. When the single umpire wasn’t looking, he’d run across the diamond from first to third, or second to home. He once hid a ball in his uniform then pulled it out in the middle of a play, claiming to have caught a flyball (that went over his head) in a twilight game that was soon called for darkness.

Many rules of today’s rules are in place because of Kelly’s “ingenuity.” He once substituted himself into a game in the middle of a play, in order to catch a foul ball while on the bench and record an out for his team. He’d intentionally drop fly balls in the infield to turn double plays. He purposely got caught in a pickle to allow a teammate to pass him on the base paths and score (which was legal back then). He’s also one of the first players known to have slid hard into 2nd in order to break up double plays.

He was the original, lovable jerk. 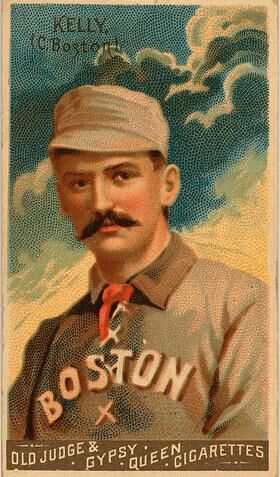 There are two kinds of people in this world: Red Sox fans and people who hate Kevin Youkilis. Sox fans love him for his circa .390 OBP, his solid slugging, and last year’s 115 RBI. Everyone else hates him because he makes Paul O'Neill look as calm and cool as Joe Torre on Valium. Is there anyone else in the world that could irritate Manny Ramirez enough to get slapped? Well, anyone under the age of 50? 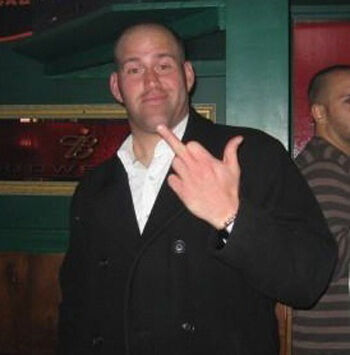 Rose played most of his career in the outfield, but there are plenty of jerks in that position. And what would a team of jerks be without Rose? He’s a degenerate gambler, and a liar. But also one of the best players ever. He’s the only man to be selected as an All-Star at 5 different positions.

Rose was admired for his hustle and competitive spirit. In the 1970 All-Star Game, he bowled over Ray Fosse in a home plate collision. Contrary to popular belief (popular uninformedness, actually), the incident didn’t end Fosse’s career. He separated his shoulder, but played again that season, and was an All-Star in ‘71. Nevertheless, if a similar incident occurred in a modern All-Star Game (despite it “counting”), could you imagine the firestorm of criticism that would fall on the “hustling” player?

And then there’s the gambling. Rose agreed to be banned from baseball in 1989. He eventually, after years of lying, admitted to betting on baseball, and betting on the Reds (but never against them, or so he says). Even without the gambling, Rose just seems like a jerk. A great guy to have on your ball club, but an overly dramatic and competitive jerk to go bowling with.

You know anyone with the nickname “Little Napoleon” is going to be quite a character. Some of his basepath “antics” sound like what heel wrestlers do when the referee gets distracted or knocked out. He’d trip opponents, block their paths, do anything to keep them from getting to the next base. As a manager, McGraw was responsible for there being no 1904 World Series because of a grudge with AL President Ban Johnson. Only Bobby Cox has been ejected from more games than McGraw. 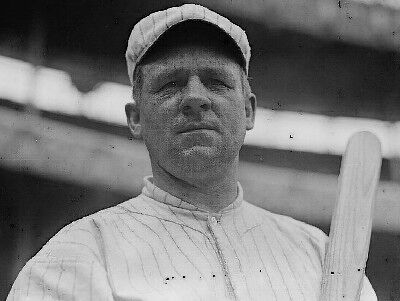 A-Rod’s a weird kind of jerk. There’s just not much to like about the guy. He dated Madonna and got a prize for being her 1,000th customer. He took PEDs, or so some say. He even tipped pitches to opponents in blowout games in exchange for the same favor in later situations, or so some say. Then there was that time in Toronto when running the bases he yelled “Mine!” in an attempt to confuse the Blue Jays infielders trying to catch a pop up. Then there was that time he slapped the ball out of Bronson Arroyo’s glove when running to first. There are so many “Then there was the times” in his career. 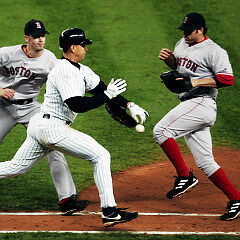 Do jerks come any jerkier? This guy is the Duke of Jerkdom. But he’s also a great player (with or without PEDs), which makes his jerkiness even more irritating. A good 400 of those 762 HRs were legitimately gotten. Plus 7 MVPs, 8 Gold Gloves, and the 6th best OPS ever make Bonds a Hall of Famer, if not for the whole HGH thing.

Barry Bonds was a clubhouse problem. Not only did he take up extra space (3 lockers plus his recliner), he incited fights, and generally pissed teammates off. He also withdrew from the MLBPA’s licensing agreements, choosing to negotiate deals on his own. The whole point of the MLBPA negotiating as a group with video games and the like was so that even journeymen players benefited from the glamour of big stars. That was too much of a loss for Bonds to take. Bonds wanted everything that Bonds had coming to him. 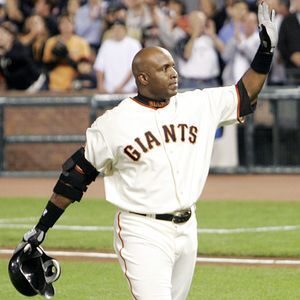 This is the Captain of the jerk team. Cobb might be the only guy on this squad who is clearly evil. I mean Old Testament evil. He’s the kind of guy that makes you hope that there is a Hell. That being said, I never met him, and the man could facking hit! He also invested in a small Georgia beverage company called Coca-Cola. Heard of it? The man was good at everything, except being a man.

Cobb’s aggressiveness and dirtiness on the basepaths would make King Kelly and John McGraw cringe. Not only would he slide hard into every base, he’d use his spiked cleats as weapons. God knows how many chopped up ankles and shins he left in his path. His most characterizing quote is when he described the game of baseball as “Something like a war.”

Cobb was a notoriously vicious racist, once pummeling a crippled man (he had no hands) for calling him the N word. There’s also a sufficient possibility that Cobb participated in the fixing of games, although there’s no concrete evidence to prove it. Then again, Cobb is so heinous, that there’s no atrocity beyond the realm of his capabilities. 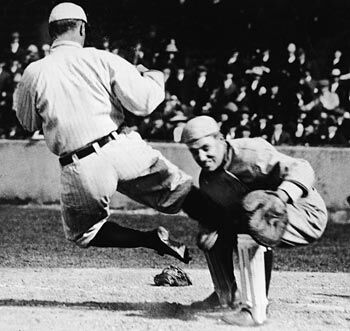 Yes, the best player ever, was also one of the jerkiest ever. He was just so loved, that even when he acted like a complete jerk, people just sort of let it go. And now, looking back, we make excuses. And certainly growing up the way he did explains a lot. And like I said in the intro, being a jerk doesn’t make you a bad person.

I think the fact that Ruth loved hot dogs, beer, and women a bit too much makes him even more loveable. We all have our own foibles, our own indulgences. Me, I like Budweisers and the bacon cheese potato burrito from Taco Bell. And Mountain Dew: Voltage. That stuff is good.

But Ruth represents our saddest faults. By the end of his career, he couldn’t even run his own bases. And we’ve all seen the movies. John Goodman did a fantastic job of showing us how human Ruth was. And again, maybe that’s why we love him, even now. We don’t even pity the tubby bastard. We can relate to Ruth’s weaknesses, which in some way connects us to his strengths. Hell, he and myself ran the bases with the same sort of piggy-trot, and that makes me feel good in a weird way. 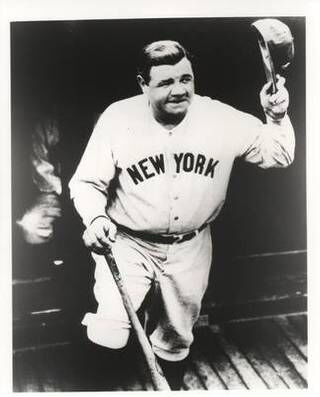 As if you didn’t know it would be him on the mound. As if anyone else could out-jerk Clemens. Gibson maybe, but c’mon. Nobody’s a bigger jerk than Clemens.

My cousin used to park cars for the Red Sox players, which sounds like a sweet gig, but think of the pressure of parking those expensive vehicles. Then think of the geometry of the player’s lot adjacent to Fenway Park, which was a triangular addition to the ballpark that was an architectural second (more like third or fourth) thought. 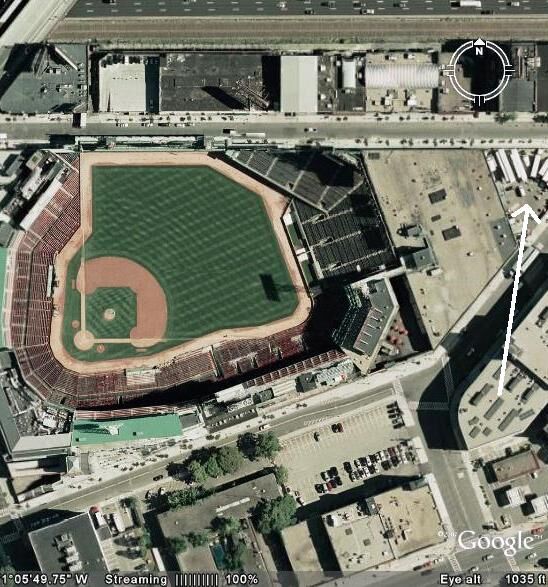 And Roger Clemens was the worst tipper of all the players. Some guys would tip a few bucks everyday. A $10 or even $5 tip adds up over 81 home dates. Some would tip all the staff at the end of the year with a big lump sum. Clemens combined both approaches, tipping only a few bucks at the end of the year. $20 to be exact. Even in the mid 90’s, when Clemens was whining for more money to be mediocre, he couldn’t spare more than Andrew Jackson to tip my cousin for not denting his Mercedes 81 times.

Oh yeah, when Roger went to Toronto, he started that whole steroid thing.

Then he left Toronto for New York, where he won Cy Youngs, and a World Series title. Then he pretended to retire, accepted a Hummer from the City of New York as a retirement present, and then unretired. He refused to give the Hummer back. Then he came back to the Yankees and sucked.

There’s really not much to like about Clemens. He had affairs with teenagers, refused to carry his own bags at the airport, was a crappy tipper, once said “I could never pitch against the Red Sox,” would show up to Spring Training fat and unprepared, and so on and so on.

And remember that bat he THREW at Mike Piazza? How the fack did he get away with that? He threw a bat at a player! Then when he was supposed to pitch at Shea Stadium, he wussed out.

I respect just about every player on this team, except Roger. He is the King of Jerks. 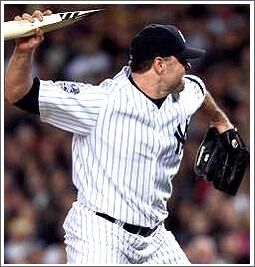 Note: Oberto Beef Jerky didn't sponsor this or has any idea that I'm using their name. But don't you think it'd be a slick advertising campaign?