ArmchairGM Wiki
Register
Don't have an account?
Sign In
Advertisement
in: Opinions, Opinions by User Trizz, March 20, 2008,
and 3 more 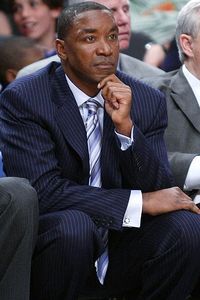 So when the story leaked about the New York Knicks talking to Indiana Pacers CEO Donnie Walsh about a possible presidential opening,the dozens of remaining Knick fans may have been delighted, others quickly realized Walsh would not exactly the biggest upgrade, but one man laughed. That man is Isiah Thomas. Say what you want about him he has become Mr. Untouchable, it has gotten to the point where Dolan must be thinking, "My god he sucks, but what can I do about it?". When asked about the whole Walsh incident, Zeke smiles and says "Honestly, I have not read them, so I can't even comment about them because I haven't read them," Thomas said. "However, it's probably safe to say that every two weeks you write this story. So there's a rumor every two weeks for the last two years, so we'll keep going here and keep working."  And he has a point, they been chanting Fire Isiah for years yet he still going to work every day and getting paid.

Though Thomas signed a multi-year contract extension last March, questions about his job status surfaced in the first month of the season, when the Knicks got off to a horrible start soon after a jury found Thomas and MSG had sexually harassed a former team executive. The Knicks are 19-48 and some hope that this summer is finally the year the Isiah Thomas era ends in New York. Even players are bracing themselves for the inevitable "I don't have the first idea, just like you guys don't on what's going to happen in the offseason, but obviously losing around here's not going to be accepted," forward David Lee said. "We understand that, so from a player's, coach's, front office standpoint, everyone knows that we need to do better and who knows what can happen in the offseason."

But Thomas isn't worried, in fact he mocks the media for consistently talking about if and when he will get canned. So is Isiah delusional, does he really think he's that good, does he have Al Sharpton and Jesse Jackson on speed dial with the race card in his back pocket, or does he have a bomb hidden somewhere in Dolan's home and he carries around the detonator 24/7. Despite his incompetence, arrogance and womanizing Isiah Thomas is Mr. Untouchable. For some reason he has the invulnerability that New York governors would die for. There's few that could get away with what Isiah has already even if this is his last year, you can't help but scratch your head but still be in awe and think how the hell does he do it.