The first thing I have proven is that preseason football is the easiest football to make a profit on. And here’s the proof: 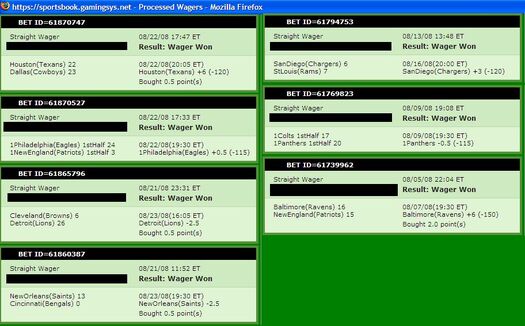 I’m undefeated this year in the NFL and hit the Giants in the last Super Bowl. I will attempt to crack the 70% mark in the regular season this year. And away we go.

Usually week one is an easy week in comparison to the rest of the season, but not this year. There are a lot of tough matchups and a lot of question marks coming into the season. It is having the discipline to leave some of these games out that make the difference between betting success and failure.

In most weeks I’ll play a few games but this week, there is only one smart play.

Jets (-3) @ Dolphins – I hate taking road favorites but this is the exception. The Jets got rid of Chad Pennington and know everything they could possibly know about him. He is now starting against them, and the Jets can now exploit the problem that plagued them last year. Because Pennington can’t go downfield, opposing defenses always crowded the line of scrimmage and clogged the running game. The Jets should be able to do that against the Dolphins. Their first team defense didn’t allow a TD against the first string offenses they faced in their last two preseason games.

While Ricky Williams might be back to his old form and enjoys the Jets over the course of his career, the Jets will basically force Pennington to beat them with a mediocre receiving core. New York will have many games this year where their secondary is a liability, but they can play single coverage against Miami. On offense, the Jets should provide good protection for Favre in their simplified offense. Jerricho Cotchery will have a big game, and the Jets should pull this one out. At worst this game is a push.

Eric Mangini knows the Jets have three tough games ahead against the Patriots, Chargers, and Cardinals. They know this is a must win game for the rest of their season.

Other lines and why I’m passing

Redskins @ Giants (-4) – These two teams usually play close games. The Redskins first team offense struggled immensely in the preseason to adjust to Jim Zorn’s offense, which is surprising considering their pieces should work well in a West Coast Offense. The Giants have major defensive issues now that they’ve lost their top two pass rushers from last year and have a vulnerable secondary. This could go either way. Just sit back and enjoy the season opener and keep your wallet away.

Bengals (-1.5) @ Ravens – While Joe Flacco should give the Bengals the win, they are still the Bengals and are too inconsistent to give them the nod against a tough Ravens defense. The Bengals are not a team you want to bank on the road.

Chiefs @ Patriots (-16) – Brady hasn’t played all preseason and the Patriots secondary is awful by Belichick standards. They could blow the Chiefs out but there’s no reason to bank them with this big a line in the opening week.

Texans @ Steelers (-6.5) – This was the other game I thought of playing because the Texans are struggling in pass coverage without their top corner, Dunta Robinson. The Steelers are a tough team, but the Texans are one of those scrappy teams that can hang around for way too long. Again, the wait and see approach is appropriate here.

Jaguars (-3) @ Titans – The Titans are a tough home team and the Jaguars still don’t have consistent receiving threats. Vince Young looks horrible but the Jaguars have to adjust to a new defense. Not worth it to gamble. If you’re not 100% sure about a road favorite, don’t play it or fade.

Lions (-3) @ Falcons – If you trust the Lions to win games on the road, you’ll lose your shirt.

Seahawks @ Bills (-1) – There are going to be a lot of people hammering the Seahawks, but they always seem to throw up an egg in the opening week. The Bills are an up and coming team, and if Trent Edwards was 100% coming into this game, I may have played the Bills. I like their rushing game and discipline.

Bucs @ Saints (-3.5) – The Saints have a prolific offense. Sometimes they torch their opponent and sometimes they create a lot of turnovers. They have a bad habit of turnovers inside the red zone. The Bucs can still play defense, run, and have a disciplined QB who won’t make mistakes. Throw in the hurricane distraction and this is a no touch game.

Rams @ Eagles (-7.5) – The Eagles will win this game but with their limited scoring options, it’s tough to take them at this line. The Rams are an enigma this season and Stephen Jackson just got back with the team. If you insist on laying money on Philly, buy it down to at least -6.5.

Cowboys (-5.5) @ Browns – If the Browns didn’t have injury issues, I would be looking hard at a money line play for them. The Cowboys are over hyped and can’t cover receivers like Edwards. The problem with this game is that the Browns should contain Barber but have questions in their own secondary after trading away the most underrated corner in football, Leigh Bodden. If you bank the Cowboys, don’t be surprised if you get nothing back.

Panthers @ Chargers (-9) – They should beat the Panthers. They should cover. But with Rivers and Merriman playing with injuries, the rust factor may keep this at a touchdown.

Cardinals (-2.5) @ 49ers – San Francisco is too tough of a team to dismiss at home against the Cardinals. Arizona has a huge edge in the passing game but we all know what happens to Kurt Warner when he’s blitzed. This is a classic no play.

Bears @ Colts (-9.5) – There are two reasons why you should stay away from this game. Manning hasn’t played all preseason and his entire game thrives on timing. Also, Kyle Orton is the other quarterback. Now that’s not something to celebrate but he won’t throw four interceptions. The Bears defense could keep it close, but this could go either way. Stay away or be prepared to get burned.

Vikings @ Packers (-2.5) – The defenses are both solid. The reason you shouldn’t bet the Vikings here is the Packers rush defense and the fact that Adrian Peterson faded over the last four games of last season. The Packers could make this a battle of the passing games. And in that case, this is an unpredictable battle.

Broncos (-3) @ Raiders – This is another one people are going to jump on in terms of the road favorite. The Raiders beat them last year and could do it again with a little help. The absence of Brandon Marshall is a big deal here. If the Raiders can establish the run, which they did well last year, this game will go down to the wire.

So there you have it. There are a lot of insightful games in the opening week and nail biters in terms of the spread and the betting. Several games look mouth watering but are the cause of surprises, especially the road favorites. Home underdogs have good records in this league.

I am taking the Jets because they are just better depth wise at nearly all positions and know they have to win their game for both public perception and scheduling reasons. But as a general rule, I try to avoid road favorites in the regular season.

Here’s to a great season of football. Good luck to all.

Retrieved from "https://armchairgm.fandom.com/wiki/Article:Evaluating_the_NFL_For_Profit:_Week_One?oldid=130198"
Community content is available under CC-BY-SA unless otherwise noted.