ArmchairGM Wiki
Register
Don't have an account?
Sign In
Advertisement
in: Opinions, Opinions by User Falcon02520, March 15, 2008,
and 22 more

Through the eyes of the falcon...

Did you miss the first few days of the trip? It's ok. Go back and visit the first and second days of this spring training Escapade.

As the alarm is sounding, you roll over onto your side. Without opening your eyes, reach out and try and find the snooze button. As quick as you'd pull your hand off a hot stove, your arm comes back under the covers. Not because it is burnt, but because someone left the air conditioner on high all night long.

Stay snug in that little cocoon a little longer because it is already getting closer to game time. Dare to reach out and grab the remote controller? It isn't worth it at this point. By the time ten o'clock rolls around, it is time to get ready. In your not-so-awake thoughts, a clever idea is developed. The bed-sheets quickly become a robe, and your royal self drags your warm ass to the shower, a hot shower.

Fast forward now; riding in the truck snacking down on some bagels from Dunkin' Donuts. It is a cloudy day, a little chilly with a slight, yet constant breeze. There is that feeling, you know the one where there is rain in the air, the brewing of a storm, even though there is no water fallen on the ground just yet. It is apparent to everyone, but a bad day in Florida beats a good day any where else.

As the truck goes rolling past the Trop on the left, you enter the down-town district of St. Pete. Not the nicest of cities, but comforting none the less. Just down the street and around the corner there sits Progress Energy Park, home of Al Lang Field; the location of today's game between the Minnesota Twins and Tampa Bay Rays.

"Where the fack do we park?" (Ok, it wasn't exactly fack, but the point has been made.) That is a darn good question. After asking a person who, well, has trouble conveying their thoughts give directions to the parking structure, a continuous loop around the block ensues for a good fifteen minutes. After following someone who is obviously just as mislead, you break off from their tail-lights and find way (eventually) up a spiral drive parking structure.

Jackets? It's a bit brisk. Na, the sun will be out soon. FOOLISH! Definitely will pay for that later. (The naive must come from Jersey.) Down the elevator and two blocks away sits will-call. The lane for tickets are improperly labeled, so after standing in a few lines the tickets are collected.

A short wait until entry is allowed, then a half-sprint through the gates and down the tunnel. The Rays are still taking batting practice, some of the less-known players at least.  Most of the big-guns were already gone for the day (ie. Crawford and BJ were seen already in CC's hummer during entry to the stadium).  Watch the exhibition put on during this windy day, then head off to grass seats down the right field foul line.

Minnesota takes the field and you take off to go look around because it is evident that the Twins brought nobody of significance to this game; not Mauer, not Liriano, not even Gomez, nobody. After talking to some fans and employees, grab a hot dog and a soda, take a seat, and watch some guys fight to make the Twins roster.

The sky grows dark as the game approaches. Nighttime at one in the afternoon? "Should we go sit in the covered bleacher seats?" Shake of the head is the quick response. "But, it's starting to rain and the camera is gonna get wet... and I don't have a jacket, and the wind will get blocked better up there."

After getting called a "little bitch" you stroll down to the end of the berm where pitching coach Jim Hickey is talking with pitcher Christopher Mason. Given that everyone has already been yelled at by the security guard for annoying them, just sit down a listen in on the conversation. Get a glimpse of intellect from a big league coach, and it could take you a long way.

Edwin Jackson takes the hill. The games is set to begin, and so is the onslaught... of precipitation. One drop at a time falls at first. As the game moves along, the frequency of rainfall increases. Slowly fans migrate over to the covered bleacher seats.

Twins Pitchers:
Boof Bonser took the hill for the Twins to begin the game. He was decent, but got slapped around by the top of the line-up.  Carlos Pena knocked him around a little as did Jason Bartlett. If Boof was a number one or two caliber pitcher it would easily be stated that he didn't look well. But since he is an end of the rotation type of guy, he pitched exactly like one would expect.

Rays Pitchers:
Edwin Jackson started on the mound for the Rays. He appeared strong, keeping his pitches down and working at a good pace. There honestly wasn't much to fear in the Twins watered-down line-up on this day, but Jackson showed his superiority as a player just as he would be expected to do. Numerous people state that Edwin is poised for a break-out season this year. After watching his confidence on the mound and command during his bull-pen, who is to argue?

Al Reyes was able to get into the game. He was not hit hard once but he was hit often. Single after single squeaked through the infield gaps. The hits were tormenting because they were just a hair out of reach for the diving Reid Brignac or just over the top of the glove from a leaping Andy Cannizaro.  Reyes was just at fault for finding the plate too often. No worries.

Twins Position Players:
The Twins brought very few interesting players to this game. Garrett Jones was the only player that really caught the eye. He displayed some amazing power in batting practice and showed a decent arm during warm-ups. Unfortunately, he didn't show that he carries much logic.

During the bottom of the fourth inning, there was an in-game delay. One of the panels in right field had fallen off the wall. As a Rays employee ran out to operate on the fixture, Jones made quite a spectacle of himself; trying to maneuver the wall back to place. After a good 7-8 minutes (and some one's self dignity) it was back to action.

Rays Position Players:
Evan Longoria... showed nothing. After a couple of ugly hacks, he was set down looking at a knee high fastball that should have easily drilled to right-center field. His second strike-out, wasn't as bad simply because the rain was coming down in heavy drops (or as Forrest Gump says "Big ol' fat rain"). It was difficult to see [the ball] but not difficult to see Longoria's second strikeout of the game. (He only had two at bats.)

Shawn Riggans got the nod to start behind the dish for the Rays. He was out on the field much earlier than any of the other players. This game him some time to converse with the fans. After signing some autographs and trying to down-play his excitement for the game to begin, he began warming-up Edwin Jackson. During the game he belted line-drive netting a single. He then played with the pitcher's head over at first base, drawing multiple throws to keep him close. Then he swiped second base anyway. A very nice all around performance from the Florida native.

The top of the fifth... DOWN-POUR!!! Everyone heads for the bleacher seating. When most arrive at their new seating, they turn around and notice that they players have also cleared the field. The grounds crew hustles onto the field, but they appear completely unorganized. It is anarchy, and quite amusing. It's a little disappointing because one they cannot even figure out how the tarp needs to be rolled out, two the little motor cart isn't strong enough to pull it (they gave up on that idea quickly), and third, this is FLORIDA! Rain happens on a daily basis, and a grounds crew can't unfold the tarp... shakes head.

Whispers begin to circulate that the game has been postponed. Take the word of others and leave, or stick around and hope the rain passes through? Really, can you trust a crowd that is just as educated on the subject as you are? Eventually a staff member points to the door, GAME CANCELED!

People wait in line, presumably to get a refund. Choosing to donate that seven dollars, you stroll down the street and back to the parking garage. There is an air of disappointment, but not to fear because there is always tomorrow in sunny Florida...

Final Score: The game did not complete the five inning minimum, therefore it is not an offical game. 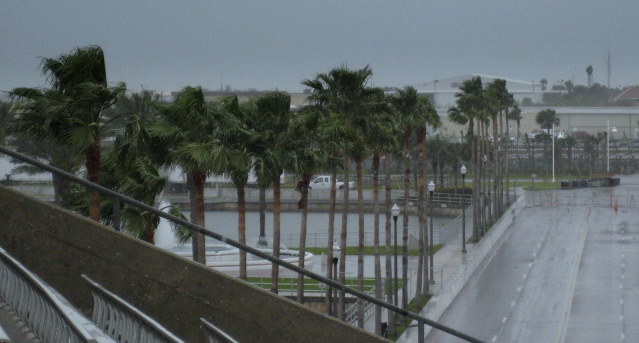