ArmchairGM Wiki
Register
Don't have an account?
Sign In
Advertisement
in: Opinions, Opinions by User T Roz, August 11, 2008,
and 3 more

Article:Brett Favre is...the Most Interesting Man in the World

Rather than trading him to New York, the Packers originally suggested trading everyone else for the entire Jets team, just so he could stay in Green Bay.

His jeans are said to be so comfortable, they can soothe a crying baby.

The NFL sold more of his new jersey on its first day of its release, than it had sold of all jerseys on any previous day.

He can make grown men cry, simply by walking away.

He has not missed a game in 17 years, but games have missed him dearly.

The only reason he was traded the first time, was because the Atlanta Falcons knew they weren’t worthy enough of his presence.

His hair coloring is meticulous, he told each hair exactly which shade of gray he wanted it.

He can throw a football over that mountain.

Tony Kornheiser refuses to fly for his Monday Night Football games, out of fear that one of his passes might go errant, and take the plane down.

He didn’t run a penalty lap, the Earth turned under him so he didn’t have to go anywhere.  He chose the pace.

ESPN actually considered creating a new station, devoted entirely to him, and all news related to him.

He has won three MVPs, as he chose not to win a fourth.

His passes are often preceded by thunder.

He just wants to have fun, to go out there, and throw that football.

He once saved an oncoming train from careening off a cliff, with an underhand shovel pass.

Quantum mechanics theorize there are an infinite amount of parallel universes in which every possible variation of ours exists.  When he throws an interception in this universe, he has actually just completed a pass in every other universe possible.

He opened his steakhouse, out of demand from the cows.

He was not born in a small town in Mississippi, a small town’s worth of people moved to the area where he was born.

Chris Berman and John Madden once had a conversation about him.  It has yet to end.

His personal jet is not powered by fuel, but rather, his aura.

Brett Favre is…the Most Interesting Man in the World.

“I don’t always drink beer, but when I do, I prefer Dos Equis.”~Brett Favre

This article also posted at http://www.sportsfanlysts.com

Add your reason why Brett Favre is the Most Interesting Person in the World in the comments. 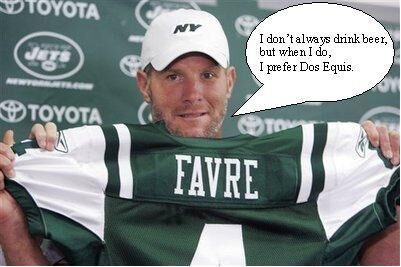