ArmchairGM Wiki
Register
Don't have an account?
Sign In
Advertisement
in: Opinions, Opinions by User TheSportsPoint, February 29, 2008,
and 6 more

From: The Sports Point 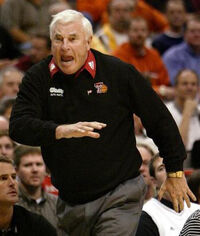 ESPN announced today that coaching legend Bob Knight will join the network as an analyst during conference and NCAA tournament coverage. Knight will be in Bristol starting Wednesday, March 12, and will finish on the set in San Antonio for the championship game April 7.

Knight resigned from Texas Tech on February 4, making way for his son to take over as head coach. This appears to be one of the the better guest analyst hires for ESPN. Knight brings with him the knowledge of the the winningest men's Division I college basketball coach and an attitude and bluntness of Charles Barkley.

"I think ESPN has been real good for college basketball and I look forward to working with some of their people who I have known a long time," said Knight.

It's not surprising that Knight will work as an analyst with ESPN due to his close friendship with analyst Digger Phelps, but it isn't expected to be a permanent plan for him. Many people expect him to return to coaching sooner rather than later. We also don't expect to run in to him eating lunch in Hartford with Jeremy Schaap.