ArmchairGM Wiki
Register
Don't have an account?
Sign In
Advertisement
in: Opinions, Opinions by User Niteowl049, March 19, 2008,
and 52 more

Chan Ho Park may be pitching for the Los Angeles Dodgers this season if he continues to pitch well the rest of spring training. In 12 innings on the mound, he has given up no earned runs and 3 hits. Since leaving the Dodgers after the 2001 season, he made a lot of money, but has actually earned very little of it. The Texas Rangers paid out $48 million for Park to win 22 games in 4 years after winning 61 games for the Dodgers in his last four seasons with them. Park only pitched 4 innings for the San Diego Padres last season, and he turns 35 in June. So time is running out, but even if it does, he has made $81 million during his career according baseball-reference.com.

Joey Votto may have missed the chance of a lifetime. He is hitting .158 this spring with one home run and 4 RBI's. His competition at first base has been Scott Hatteberg and Andy Phillips. Phillips has hit .243 this spring while Hatteberg is hitting .382, but if Votto had a decent spring, he probably would have made the team. Votto was called up by the Cincinnati Reds last season and hit .321 in 84 at bats and hit 4 homers and drove in 17 runs so he looked like he was ready to make the team in spring training but I will be surprised if his name is not listed in the transactions telling that he has been sent back to the minor leagues anyday now.

Cole Hamels pitched 6 innings of two hit baseball against the Tampa Bay Rays, and Matt Garza took his first win of the spring, showing he is ready for the 2008 season. Garza didn't pitch that badly, giving up three unearned runs in 6 innings, which some regard as a quality start. Evan Longoria hit his third home run of the spring off of Hamels showing he can hit off the best pitchers.

In a game which I saw on ESPN yesterday, the Washington Nationals pounded the Detroit Tigers 9-1. Justin Maxwell hit a monster shot for his second home run of the spring and drove in four runs. He also threw Curtis Granderson out at home. Maxwell has not played above A ball in the minors, but he did play for Nationals last season, hitting 2 home runs, driving in 5 runs, and batting .269 in 15 games. He also stole 35 bases last season between two minor league stops. The Nationals are probably are torn right now deciding whether he needs more seasoning in the minors or let him develop in the majors. Based on what I saw yesterday, he is ready to join the team now, but the Nationals may not agree with me.

Lastings Milledge hit a long home run to put the Nationals ahead 1-0 and the Nationals never looked back and scored seven times in the sixth inning. Marcus Thames homered in the ninth inning for the lone run by the Tigers. Thames is one of the best fourth outfielders in baseball and would be a regular on a lot of teams. His main drawbacks are that he doesn't hit for average with a .241 lifetime average or possess much speed with only 3 stolen bases in 332 games but he will hit a lot of home runs.

Aramis Ramirez hit his first home run of the spring in the Chicago Cubs' 6-5 win over the Kansas City Royals. Casey McGehee has had a good spring, but since he is a third baseman, he won't be playing third base anytime soon for the Cubs with him stuck behind Ramirez. McGehee is also a catcher, so has a chance of making the team as a catcher. McGehee is outhitting highly touted Geovany Soto, who is hitting .219 this spring. McGehee is hitting .522 and has hit a home run and driven in 8 runs which is second on the team behind Alex Cintron with 9. McGehee is leading the team in on base percentage with .542 mark and is second in slugging with a .826 slugging percentage.

Jeff Suppan is still struggling this spring after losing 11-4 to the Los Angeles Angels. He gave up 6 runs, 6 hits and walked 3 in 4 2/3 innings including home runs to Vladimir Guerrero and Torii Hunter. Suppan finished the game with an 0-2 record and an ERA of 11.37. It will be interesting to see if Brandon Wood makes the big league roster on opening day. He is tied for the team lead in home runs with Torii Hunter but is hitting only .139 with 15 strikeouts and no walks in 36 at bats.

Daric Barton (hitting .172 this spring) and Dan Johnson (hitting .178) continue to struggle this spring. However, Barton did hit a three run home run yesterday in the 11-6 win by the Texas Rangers over the Oakland A's. Josh Hamilton picked up his major league leading 13th RBI in the game for the Rangers.

The Milwaukee Brewers are ahead of the Florida Marlins by 15 percentage points with a 14-7 record. All four defending NL playoff teams (the Colorado Rockies, Arizona Diamondbacks, Philadelphia Phillies, and Chicago Cubs) have losing records this spring. The San Francisco Giants, with a 6-15 record, are eight games behind the first place Brewers, and are the worst team in spring training.

Bad Trade: What Were Rangers Thinking?

On January 26, 2006 the Texas Rangers traded Chris Young, Adrian Gonzalez, and [[Termel Sledge[[ to the San Diego Padres in exchange for Adam Eaton, Billy Killian, and Akinori Otsuka. This trade has turned out to be a lopsided trade in favor of the Padres.

The Padres received in Chris Young, a pitcher who has been a big part of the Padres success. His ERA last season was 3.12, the fifth best in the NL. His 9-8 record last season doesn't begin to tell how well he did last season. In 173 innings pitched, he gave up only 118 hits and struck out 167, and gave up only 10 home runs. The Rangers could have used Young last season in a season which they were 29th in ERA with a 5.19 mark.

The Padres also received Adrian Gonzalez, a slugger who has had 24 HR-82 RBI-.304 AVG and 30 HR-100 RBI-.282 AVG seasons since the trade. If the Rangers had kept Gonzalez, they would have had someone ready to step in for Mark Teixeira when he was traded last summer. The third player the Padres received in Termel Sledge is no longer on the Padres roster so the Rangers at least have the satisfaction of knowing not all three of the players they traded played well for the Padres.

The Padres unloaded three players on the Rangers who are not on their roster at the present time. Adam Eaton was 7-4 with a 5.12 ERA in the one year he was with the Rangers. They paid him $4.6 million for those 7 wins. Eaton signed as a free agent with the Phillies after the 2006 seasons.

Akinori Otsuka did pitch well in 2006 for the Rangers with 32 saves and a 2.11 ERA with 4 saves, but lost his closer job despite his 2.51 ERA. Otsuka is no longer on the Rangers roster and is an unsigned free agent with the start of the season looming next week. I cannot see why Otsuka has not been signed with his 2.44 lifetime ERA. Maybe he has had a health problem that has prevented him from being signed.

The third player the Rangers acquired in the trade was Billy Killian, a catcher who will be 22 in June. He has played four seasons without advancing past A ball and has never hit a home run in 577 minor league at bats. He too is no longer with the Rangers, as he is in the Chicago White Sox' farm system, and I question why they would sign him. Last season, he walked only 3 times in 95 at bats, showing he has no plate discipline. He has a lifetime average of .241 in the minors and a .329 slugging percentage. I will be surprised if Killian ever surfaces in the major leagues even though time is on his side.

So, in summary, the Padres acquired a front line pitcher and a slugging first baseman in the trade in Young and Gonzalez, while the Rangers acquired a pitcher in Eaton who is no longer with them and has not done well since leaving them. They did receive Otsuka, who has helped them in the bullpen, but the trade clearly favors the Padres. Killian and Sledge cancel each other out as both of them are no longer with the Rangers. So all the Rangers got out of the deal was bullpen help for a couple of seasons while the Padres should see years of successful seasons from Young and Gonzalez.

Players From the Past: Jimmy Piersall

I can remember when I saw "Fear Strikes Out" in 1957 and became very interested in Jimmy Piersall. I even read the book after seeing the movie. Anthony Perkins portrayed Piersall in the movie and Karl Malden played the part of his father. Television fans of 77 Sunset Strip will remember Edd "Kookie" Byrnes who plays a small part in the movie. 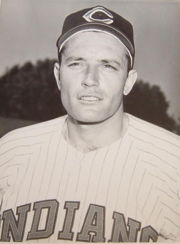 I saw the movie "Fear Strikes Out", but remember little about it. I do remember he was given shock treatments when he was in a hospital. I also remember him shooting home plate with a water pistol and that his dad was pushing him to play baseball. Piersall later stated that the movie overblamed his father for his problems.

Readers who have seen the movie recently or have a better memory than me since 51 years have passed since I saw it are welcome to review the movie.

Listed below are some of the errors made in the movie:

Sorry for that diversion. Now back to his career in baseball. James Anthony Piersall was born in Waterbury Connecticut in November 14, 1929 making him 78 today. He suffered from bipolar disorder which caused him to act strangely on the baseball field.

On May 24, 1952 he and Billy Martin fought before the game started then later that day he fought with a teammate Mickey McDermott. While with Birmingham in the minor leagues he sprayed a water pistol on home plate and then climbed on the grandstand roof heckling the home plate umpire who had thrown him out of the game.

After leaving the team for treatment at Westboro State Hospital in Massachusetts he rejoined the team and replaced Dom DiMaggio as the regular Red Sox centerfielder. He was a great centerfielder, winning Gold Gloves in 1958 and 1961.

He hit one home run while with the New York Mets, but it was a special one and he ran the bases backward with him facing backwards but in the right order, as he ran the bases in celebration of his 100th home run. He hit 64 of his 104 home runs in four seasons, hitting only a total of 40 in his other 13 seasons.

He played in more than 140 games only four times in his career. He only batted over .300 once in a season with at least 400 at bats when he hit .322 for the Cleveland Indians in 1961. He played for Boston Red Sox, Cleveland Indians, Washington Senators, New York Mets, and California Angels during his career. On May 1, 1967 he played his last major league game.

Piersall spent four seasons as broadcaster with the Chicago White Sox, but the White Sox management fired him for his harsh criticism of management on the air. It is usually not wise to criticize the people signing your paychecks but Piersall was not one to hold his tongue.

Mrs. Babe Ruth once told Piersall that the Babe would have loved to have seen Piersall play baseball, which gave Piersall a thrill.

Piersall reportedly has had a triple bypass and a quadruple bypass, but his doctor told him he was too ornery to die.

The link below leads to a story dated today from the Dallas Morning News about Piersall and what he is doing today.