ArmchairGM Wiki
Register
Don't have an account?
Sign In
Advertisement
in: Opinions, Opinions by User Falcon02520, January 16, 2008,
and 7 more

Dilatory is, "marked by procrastination or delay; intended to cause delay; said of actions or measures."  There was a delay in a broken record that has fallen into the wrong hands.

Barry Bonds is the all-time home run king.  No matter whether he did it with steroids, hGH, or whatever else he may have used.  Whether or not he is admitted into the Hall of Fame or not is an issue for the sports writers to deal with when his name appears on the ballot in a few years.  Whether Bonds goes to jail for perjury is another useless argument at this juncture.  That issue is left up to the United States court system. 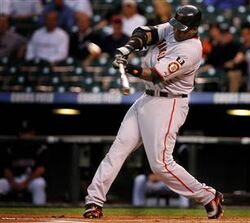 What nobody wants is for the record books to say this:
Barry Bonds 762
Hank Aaron 755
Babe Ruth 714

Somebody has to surpass Bonds on this list.  It simply does not seem right for this alleged cheater to be atop the list.  For baseball's dignity (or little left there is of it) Barry Bonds cannot be first on this list, asterisk or not.

So who is going to do it?  Who has the talent, the durability, the ability, and is on pace to be the new all-time home run leader?  Well... there is a list.  Obviously, Alex Rodriguez tops this list in having the best chance in surpassing 755 762.  As every sports fan knows, injuries or a sudden lack of production can quickly derail any player from achieving the highest honors in their sport.  The likes of Tony Conigliaro's untimely injury, Ted Williams leaving to fight for his country, Ken Griffey Jr.'s sudden ability to get hurt... wait, Griffey Jr. was healthy last season? 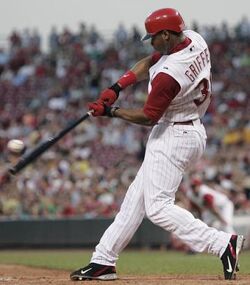 Exactly right! Ken Griffey Jr. was once on pace to shatter Hammerin' Hank's record.  Barry Bonds was just an after thought because Alex Rodriguez and Ken Griffey Jr. would be listed as the top two home run hitters in baseball history.  Alex and Ken both started when they were each nineteen years old (Alex in 1995 and Ken in 1989).  Bonds, being older had a head-start in the chase, beginning in 1986 at the age of 21 (after passing up playing with the San Francisco Giants and opting for college).  It would not be seen until many years later that Bonds would have a chance at the all-time home run record.  Griffey on the other hand was thought to undoubtedly pass Mays, then Ruth, and eventually Aaron.  It didn't quite work out that way.

Injuries started biting Junior in 2001.  It was to be his second season with his home-town team of Cincinnati.  At the age of 31, Ken Griffey Jr. experienced something all athletes... all humans experience... age.  He was getting older but still playing like he was twenty.  The injury bug bit him, and bit him hard.  Since that dreaded 2001 injury season, Griffey has only once accumulated over 500 at bats.  That one time was last year.  That means from 2001 until 2006 Junior never had more than 500 at bats in a season.  That is a six year stretch (for those of you who can't/don't want to count).  Over that six year stretch Griffey totaled 1946 at bats (not even four full seasons worth of at bats) and 125 home runs (roughly 20 home runs per year).

Hope is not all lost.  If Griffey can stay healthy and continue to thrive in a hitter's park, he may still become the all-time greatest (until Alex Rodriguez catches up, at least).  The move to right field will definitely help Griffey's health, and an eventual move to a designated hitter position in the American League could be a great fit.  If he could only play another five or six years with 450+ at bats, he still may have a shot.  The window is small, but it is not gone.

Junior is 169 home runs shy of Bonds entering the 2008 season.  If he can stay healthy for five more years, he would need to average 34 home runs per year to pass Barry (this would mean Griffey would need to play until his 42nd birthday).  If he could squeeze out another year, the average he would need would be 28 home runs per year (taking him up to his 43rd birthday).  In today's day and age, playing well beyond forty years of age has become common, and many players have been able to add to their legacy in these later years; Greg Maddux, Roger Clemens (regardless of alegations), and the ageless wonder.  So it is not out of the question for Junior to go to an American League franchise with a hitter friendly park and be the designated hitter.

Ken Griffey Jr. was once proclaimed to be possibly the best player of all-time baseball.  Along with his gold-glove abilities in the field, he also brings to the plate one of the sweetest swings that baseball has ever seen.  He never was simply a home run machine like McGwire, but an all-around talent, on the All-Century Team, with a .290 career average, 13 time All-Star, 2 time MVP, and all in only 10 seasons with 500+ at bats.  Currently he ranks sixth on the all-time home run list, and it does not seem that he will stay that low when it is all said and done.

Griffey passing Bonds would be a push; he could knock Barry out of the number one slot in five or six short years, but if he is unable to do so, Alex Rodriguez stands next in line in having the opportunity to reach 755 762. 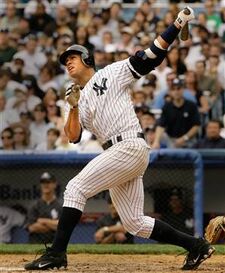 Alex Rodriguez is secret.  Every fan knows that he is well on pace to shatter oh so many records.  Entering next season at 32 years old, he already has accumulated 518 home runs.  This count is only 244 home runs off the record.  If Alex plays through 2015 (putting him at 40 years old), he would have to average 31 home runs per year. Very doable for the talented slugger.

Alex has never had any major injuries.  He has gone the last twelve years of his career having over 500 at bats per season and during that stretch, hitting less than 35 home runs per year only once (1997).  Alex is very precautions of getting hurt, evident by his constant work-outs in which are dominated by flexibility training.  God willing, this should allow Alex to remain healthy for the remainder of his career. 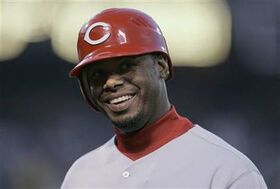 Injuries are a part of sports; sometimes they are derailing of a historical milestone... sometimes they are avoided, and sometimes the adversary is overcome.  But in the case of the chase, lets all hope that the injury bug stays away from Ken Griffey Jr. and Alex Rodriguez, so that one day the top of the all-time coveted list in sports will read: