Well, it sure doesn't feel like a baseball opening day today; the calendar says April, but outside the weather feels more like mid-November: another wet, sunless, dreary drag of a day. Yesterday the Yankees were rained out, delaying for at least one more day the beginning of what already is being hyped to death as the last opening day of the final season at old Yankee Stadium; the new, unnecessary, faux Yankee Stadium will open up for the 2009 season. (Unlike the new Citi Field replacing Shea Stadium, where the case can be made that a new facility for the Mets has long been needed.) In a City where scores of new high-rise luxury office and residential high rises increasingly mar the sky scape, it's only fitting that an irreplaceable, history-drenched sports museum of a stadium will be razed to make way for a building designed to look like it's 100 years old. Such is the heartless essence of the New York real estate market and its devastating effect on neighborhood after neighborhood, memory after memory.

Tonight's game is against the Toronto Blue Jays, who for the seventh or eighth year running is supposed to be a "much improved" team, but more of my focus will be on the NBA tonight, with the Philly Sixers looking to regain their winning ways against the New Jersey Nets.

My recent sports-viewing policy has been to almost totally ignore the first 10 games of the MLB season. I mean, the season is so darn long, and the opening few games so meaningless in terms of individual stats as well as overall team standings, that it's best to let the season establish itself before giving it anything more than a cursory glance at the box scores in the morning paper. That's my theory, and you're free to partake of it as you wish. Maybe it's the dismal New York weather, but I just can't get into baseball right now. It seems that lately for me it's been more of a case of hating the New York Mets and despising the Boston Red Sox and their respective collections of annoying followers that drives my passion for the game. That's what it's come to; I'm just being honest. As long as any other team besides the aforementioned Mets and Red Sox win it all, I'm okay with that. Sure, it would be nice to add another World Series title as the ghosts of old Yankee Stadium witness this final season at the same ballpark where Gehrig and Ruth and Joe D. and Mantle and Berra once plied their trades. As no other than Derek Jeter put it: "Just 100 yards away? That's not too far for the ghosts to go." Okay, Derek, but why should they have to move at all?

As for the 76ers, after beating the Bulls last Wednesday 121-99 to move two games over .500 at 37-35 and further solidify their playoff chances, the Sixers have dropped a pair of games, losing at home to Phoenix 107-93 and then a close one at Cleveland, 91-88. Heading into tonight's game at the Meadowlands, it's important to not fall under .500 again, if just for the collective psyche of the club. Plus, the schedule doesn't let up from here on out with 8 games remaining. The Sixers are just a game and a half out of the 5th seed in the Eastern Conference. Following tonight's Nets game, the Sixers play a home-and-home series against Atlanta; then home games against the Pistons and Pacers; followed by games at Washington, home to the Cavs, and then on the road against Charlotte. I'll take winning 6 of those 8 right now, which would give us a 43-39 record heading into the playoffs -- not bad for a team that almost literally crawled back from the dead (an 18-30 record in January). 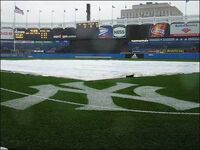