After last weeks second-half fireworks in which the Niners put up 21 points in impressive fashion, by airing their offense out, a lot of fans, and even players, publicly suggested the Niners use more of a spread formation on offense. On Sunday vs. Jacksonville, they did just that and saw very positive results.

The 49ers won an easy one, finally, 20-3 over the Jaguars, and they did it by optimizing their passing attack. Alex Smith had one of his better, complete ballgames as a pro, as he stayed pretty steady throughout the afternoon. In recent weeks, it's almost as if he turns in one good 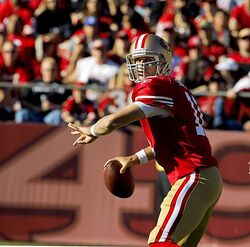 half and one below-average half per game, but on Sunday he put it all together. Smith threw for 232 yards and 2 scores, going 27 of 41 on the day and avoided getting sacked. Smith took most of the snaps out of the shotgun formation and looked at ease. In no way am I comparing Alex Smith to Tom Brady, but he really was Brady-esque on Sunday, as he spread the ball around to all his targets rather than focusing solely on Vernon Davis and Michael Crabtree. Josh Morgan had 6 catches and Delanie Walker contributed 4, to go along with Davis' 6, Crabtree's 4 and Frank Gore's 7. As a by-product of the aggressive passing attack, the Niners didn't get their running game going really at all on Sunday, but they didn't need to. Frank Gore ran 16 times for 33 yards, as the Niners ran for just 52 yards on the day. Still, their offense managed to put forth a solid effort to get the W, and the big stat that stuck out at me was the 0 in the turnover column for Alex Smith and the entire offense. It was the first game of the year in which he did not turn the ball over, which helped out the defense just as much as the offense. The defense had their way with the Jaguars' offense, and although they allowed David Garrard to pass for over 300 yards, they kept Jacksonville out of the end zone and held Maurice Jones-Drew (15 carries, 75 yards) in check. 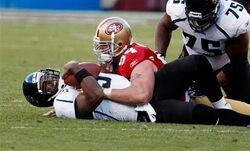 I think the Niners' plan was to make Garrard beat them through the air and he just wasn't able to do so. The Niners had no problem getting pressure on him, as they collected a season-high 6 sacks. The 49ers also got some help from the Tennessee Titans on Sunday, as well, since the Titans and Vince Young came back in the 4th quarter to beat the Matt Leinart-led Arizona Cardinals. The Niners' win and Cardinals loss moves the 49ers to within 2 games of the Cards; remember that they still have one more meeting with each other before the season ends. It's not the best of odds, but Sunday's victory definitely pumped some life back into San Francisco's playoff hopes.

Retrieved from "https://armchairgm.fandom.com/wiki/Article:Alex_Smith_Carries_Niners_Past_Jaguars?oldid=126093"
Community content is available under CC-BY-SA unless otherwise noted.