ArmchairGM Wiki
Register
Don't have an account?
Sign In
Advertisement
in: Opinions, Opinions by User Whatifsports, June 16, 2008,
and 6 more

The third in a series of NFL season previews, this is the AFC West. Can anybody challenge the Chargers or will San Diego win its third straight division title?

As we did last season, Whatifsports will utilize our NFL simulation technology, statistical research capabilities, up-to-the minute roster and depth chart information to preview the upcoming NFL season. We will look at each division before presenting final standings, fantasy and statistical leaders, award winners, playoff results and power rankings. This analysis is part of a broader endeavor with FOXSports.com's Fantasy Football.

Rosters and depth charts are up-to-date and as accurate as possible as of June 8, 2008. A schedule of upcoming NFL preview content including links to other previews that have already been posted is located here.

Today we will look at the AFC West. The article can also be found here, where you can find details on how we generate the results and the definition of the Absolute Record. 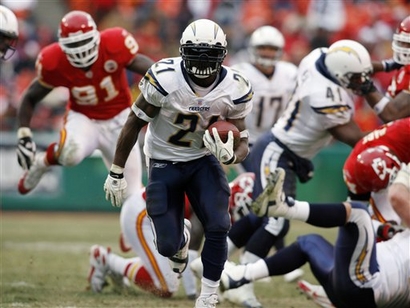 San Diego was our Super Bowl pick in this exercise last year and they do not look too far from it again this season. A rehabilitating quarterback and thin secondary are about the only obstacles on San Diego's path to another deep playoff run. The Chargers average 28.2 points per game (#4 in the NFL) and allow 19.4 points (#4) against a schedule featuring just four games against 2007 playoff teams.

Most Significant Newcomer: Jacob Hester, RB - This is not really saying much. Basically, we mention Hester as a means to talk more about the team's most significant loss, Michael Turner. Along with Darren Sproles, Hester will spell LaDainian Tomlinson. Sproles will likely get the third down looks, so the 224-pound Hester will be counted on to get tough yards. He may also get some time at fullback after Lorenzo Neal's release. Look for 250 total yards and three touchdowns.

Biggest Strength: LaDainian Tomlinson - LT can still do it all. Last season, it was a bit of a surprise that he failed to reach 2,000 total yards after 2,323 in 2006. He had 1,949 yards and 18 TDs. That's a down year? Whether it is good for his future or not, especially with [[]Philip River]s hobbled, the Chargers will lean on LT as much as ever.

Most Exploitable Weakness: Depth - With Michael Turner in Atlanta, the backfield is questionable after Tomlinson. The defensive backfield appears to be thin as well. San Diego will likely lean on rookies Antoine Cason and Dejuan Tribble to go with second year players Eric Weddle and Tra Battle.

Possible Fantasy Sleeper: Craig Davis, WR - In another reference to the lack of depth on this team, Davis may be needed if Vincent Jackson fails to produce again this season. He will likely never be a home run threat, but Davis could be a good possession receiver who earns Rivers' respect in the red zone. At this point, we have the second-year player at 42 receptions for 469 yards and three touchdowns.

Closest Game: @ Pittsburgh (Week 11) - San Diego is an underdog in one of just three games on the schedule (vs. New England and vs. Indianapolis the others). Despite being on the road, this is definitely the most winnable of those three games. The Colts come to town the next week, so San Diego needs this game to gain confidence and momentum.

It may not seem like much for Cardinals and Bengals fans, but three years without a playoff appearance for Mike Shanahan and Broncos is a drought. Worse yet, there are good players on this roster, but not many exciting names or potential stars. The Broncos average 24.7 points per game (#12) and allow 26.6 points (#24) against a schedule featuring five games against 2007 playoff teams.

Most Significant Newcomer: Boss Bailey, LB - Bailey should be able to step right in and be instantly productive alongside D.J. Williams. The wide receiver additions, Darrell Jackson, Keary Colbert, Edell Shepherd and Eddie Royal, also warrant consideration, but none have shown the consistency (at any level) needed to be singled out on this list.

Biggest Strength: Shanahan - In his 14th season leading the Broncos, Shanahan still knows a lot about football and how to build a team that can run the ball on offense and force turnovers on defense.

Most Exploitable Weakness: Lack of a star - Simulations like these take human bias out of the argument, but what is going on here can be explained in a very human way. With the possible exception of Champ Bailey, there are no stars on this team. There is not really anything to get people excited. In the sim, that translates into the fact that no player puts the team over the top. Yes, it is balanced and lacks an obvious weakness, but Denver is balanced in a very average way across the board.

Possible Fantasy Sleeper: Ryan Torain, RB - It could be Andre Hall, Michael Pittman or Selvin Young (if he is considered a sleeper), but we will go with a deeper sleeper here because that is how nice Mike Shanahan is to fantasy football players. Torain was a very productive back in college who ran into injury issues as a senior. With Travis Henry gone and the team lacking a go-to, all-purpose back, Torain may be the guy. In the simulated season, he nets 529 total yards and five touchdowns.

Closest Game: @ New York Jets (Week 13) - Again, this is not a tie; it's just that close. Especially with the off-season moves made by New York, Denver and the Jets are two very similar teams, who should end the season with similar records. 2008 will play a huge role in the future of both franchises, so this game that will not really have any playoff significance, could be very important.

For the first time in a little while, the Raiders look promising and exciting on both sides of the ball. Unfortunately for the Black Hole, that will not yet translate on the field. Still, with a pretty weak schedule, the young players on this team may gain the confidence they need to become stars in the future. The Raiders average 22.8 points per game (#18) and allow 27.3 points (#27) against a schedule featuring just four games against 2007 playoff teams.

Most Significant Newcomer: DeAngelo Hall, CB - Darren McFadden is the sexiest choice here, but Hall cannot be ignored. He is close to a shutdown corner who can still make plays. Plus, with defenses shying away from his side, watch for Nnamdi Asomugha to approach, if not exceed, his interception total of 2006 (8).

Biggest Strength: Intercepting - Not only do the Raiders have Hall and Asomugha, they have two of the best pass defending linebackers in Kirk Morrison and Thomas Howard. That tandem combined for a remarkable ten interceptions in 2007. And we have not even mentioned Gibril Wilson, who led the Super Bowl champion Giants in interceptions with four. Opposing quarterbacks could be in trouble against the Raiders. Fans in the first few rows should expect a few passes.

Most Exploitable Weakness: Being Intercepted - JaMarcus Russell made his share of mistakes in limited play as a rookie. That will likely continue for at least another season in Oakland. The simulated season has Oakland intercepting 23 passes, but throwing 22.

Possible Fantasy Sleeper: Drew Carter[, WR - Some may look at our numbers and put tight end[ Zach Miller]] here. We think so highly of him, it's hard to call him a sleeper. So, we went for the number three wideout, Drew Carter. Al Davis loves deep threats and Carter can be that guy. Ronald Curry is the possession receiver and Javon Walker is an injury waiting to happen, so Carter should get an opportunity to shine. We have the former Buckeye at 28 catches for 509 yards and three touchdowns.

Closest Game: @ New Orleans (Week 6) - It is feast of famine for Oakland who is only between a 40%-60% favorite in one game all year (that is almost unheard of in the NFL). The Saints are still favored by nine points, but the Raiders will have the bye week to prepare for the trip to New Orleans so they may just get out of there with a victory.

It would be great to talk optimistically about a fairly easy schedule for the Chiefs, but that is tough to do when they are not favored by more than 40% in any game. When a team has to get a little lucky at least once just to get on the board, it is going to be a tough year - talk to the Dolphins. But, this is part of the plan to go young and develop players this season in hopes of contending in the near future. The Chiefs average 18.0 points per game (#32) and allow 29.4 points (#32) against a schedule featuring five games against 2007 playoff teams.

Most Significant Newcomer: Glenn Dorsey, DT - It is very difficult for a defensive tackle to make a profound impact on a defense in his rookie season. Dorsey will, partly because he has to and partly because he has NFL-ready athleticism and drive. The sim likes Dorsey to rack up 28 tackles and five sacks. Other draft picks like Branden Albert, Brandon Flowers and DaJuan Morgan should get the playing time needed to make a difference on this team as well.

Biggest Strength: Youth - Young players can oftentimes luck into wins before they really know what they are doing in the league. With a roster full of players 26 years old and younger and 12 newly drafted rookies, Kansas City has plenty of youth. Speed and agility tend to come with youth as well. Kansas City may actually be one of the faster teams in the league position-by-position.

Most Exploitable Weakness: Experience - It may be a little too obvious, but that youth is also the same reason that this team is a few years away from a chance at success. Remember when this team had the best offensive line in the league and too many running backs?

Possible Fantasy Sleeper: Tyler Thigpen, QB - Brodie Croyle will be given plenty of opportunity to make this his team, but it may not work. If it doesn't, or if Croyle endures another major injury, Thigpen is next in line. Physically, the Coastal Carolina product is the prototype: 6'3", 220 pounds with great mobility and a big arm. Like the rest of this team, he just lacks experience. He may get his shot this year. We have him starting four games and throwing for 738 yards, four touchdowns and three interceptions.

Closest Game: New York Jets (Week 8) - This is the Chiefs' Miami vs. Baltimore moment. Brodie Croyle to Dwayne Bowe may be better than Cleo Lemon to Greg Camarillo, but that may have to be the difference against a porous Jets' secondary.

Click here to view a schedule of 2008 NFL previews and see others that have been posted. Other previews on ArmchairGM are:

Whatifsports.com specializes in answering the great “What if?” questions in sports by simulating games between historical teams and has exciting simulation games for MLB, NBA, NFL, NHL, college basketball and college football.

For more of Whatifsports.com's content, please visit Beyond the Box Score.