The last of our AFC previews, we look at the AFC South. The Colts are still the dominant force but the Jags figure to be in the playoff hunt again.

As we did last season, Whatifsports will utilize our NFL simulation technology, statistical research capabilities, up-to-the minute roster and depth chart information to preview the upcoming NFL season. We will look at each division before presenting final standings, fantasy and statistical leaders, award winners, playoff results and power rankings. This analysis is part of a broader endeavor with FOXSports.com's Fantasy Football.

Rosters and depth charts are up-to-date and as accurate as possible as of June 8, 2008. A schedule of upcoming NFL preview content including links to other previews that have already been posted is located here.

This AFC South preview can also be found here, where you can find details on how we generate the results and the definition of the Absolute Record. 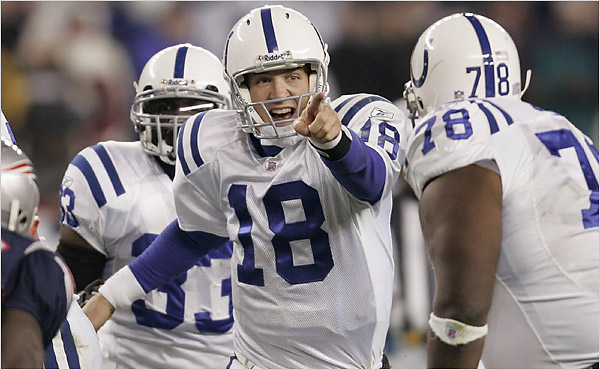 It may feel like it because they are always winning, but this is not the same team that the Colts keep running out there to win the division. Each season has some defections and each season the Colts find talent within their own limited player pool to step up and fill the void. 2008 is no different. This year, some of Peyton Manning's weapons from the past few seasons are gone or banged-up and a lot of the depth on defense moved on, yet there are several great talents ready to step up. The Colts average 29.1 points per game (#3 in the NFL) and allow 20.5 points (#8) against a schedule featuring nine games against 2007 playoff teams.

Most Significant Newcomer: Mike Pollak, OL - This is probably the most difficult team to pick of any in the league. The Colts build their teams from the draft up and typically develop a player for a couple years before they try to count on him. For 2008, this is amplified by the fact that the Colts had no first round draft choice and no glaring needs or major free agent acquisitions. From the nine players drafted, Pollak, a second-round pick out of Arizona State looks like the most valuable to the team right now. He may be asked to start at guard immediately and eventually replace Jeff Saturday at center.

Biggest Strength: Peyton Manning - The answer here is probably the same as with Patriots. The "system" or the brain trust between Peyton Manning and Tony Dungy runs this team and keeps everything running smoothly.

Most Exploitable Weakness: Running game - Joseph Addai is a great talent and a fantastic fantasy performer, but the Colts were a slightly below average running team last year and Addai cannot be the only guy. The team brought back Dominic Rhodes and drafted Mike Hart, but neither projects to improve the team rushing average.

Possible Fantasy Sleeper: Anthony Gonzalez, WR - Last year's first round pick had a promising rookie season. With Marvin Harrison aging, hurting and potentially in legal trouble, Gonzalez will get plenty of opportunities in 2008. Even if Harrison plays well all year, Gonzalez is a rich man's Brandon Stokely. The simulated season has him at 53 catches for 885 yards and six touchdowns.

Closest Game: New England (Week 9) - We mentioned in the New England Patriots preview that this should be another classic. As it stands, it is the Colts only projected loss. Interestingly, with such a tough schedule, they are only heavily favored against a couple of teams. This leads to a much lower expected record than absolute record.

"Always a bridesmaid..." Well, maybe they have not endured the same plight as the early '90s Bills, but this is a very good football team that should be winning divisions. In 2008, the offense improves a little and the defense dips a bit. The Jaguars average 25.7 points per game (#8) and allow 21.3 points (#10) against a schedule featuring six games against 2007 playoff teams.

Most Significant Newcomer: Jerry Porter, WR - If he can play the whole season, Porter's impact on this team looks to be bigger than fellow WR Troy Williamson, CB Drayton Florence or any of the rookie pass rushers. He gives David Garrard and the Jaguars a legitimate deep threat. Not only does that greatly improve the downfield passing game, it could open things up even more for one of the league's top rushing attacks. Expect Porter to go for about 50 catches, 842 yards and six touchdowns.

Biggest Strength: Running Game - Almost an afterthought on the team a couple of years ago, the Jaguars' offense is very potent. The combination of Fred Taylor and Maurice Jones-Drew helped to lead the AFC with 149.3 yards per game in 2007. With improvements to the passing game, the ground game should be even more productive in 2008.

Most Exploitable Weakness: Rush Defense - What used to be one of the best defenses up the middle has fallen off a bit. In 2007, Jacksonville was right in the middle of the league, allowing 4.1 yards per carry. Now, DT Marcus Stroud, who had been hurt at the end of last year, is gone to Buffalo and the team focused on its pass rush in the draft.

Possible Fantasy Sleeper: Troy Williamson, WR - We could go with several WR here, but Williamson is the most likely to break out. The former first round pick of Minnesota is in new surroundings where he will be given a chance to start alongside Porter. Williamson possesses great speed as well. Our projection is 39 catches for 577 yards and four touchdowns.

Closest Game: Minnesota (Week 12) - Big Ten football fans will love this game, though "three yards and a cloud of dust" may end up being "five yards and tripped up." Both teams have at least two good running backs and a young, fairly mobile quarterback. Jacksonville makes fewer mistakes, but Minnesota's defense is better.

Take this with reservation as the Titans are one of the very few teams in any sport that have found a way to outplay their numbers en route to the playoffs (kind of like the opposite of the Arizona Cardinals every year). It seems they play to the level of their competition, winning a lot of games as slight underdogs and never beating any team handily. The offense does not seem good enough to carry this team to another Wild Card. The Titans average 19.8 points per game (#31) and allow 21.0 points (#9) against a schedule featuring six games against 2007 playoff teams.

Most Significant Newcomer: Chris Johnson, RB - The kid can fly. Johnson will give this offense - and special teams - some excitement with his speed and ability to return kicks, catch passes and run outside. Will Mike Heimerdinger, who prefers a more straight-forward offensive approach, be creative enough to make the most of him? We project Johnson to gain 859 yards from scrimmage and score six touchdowns (not including returns).

Biggest Strength: Jeff Fisher, Head Coach - The defense may be pretty good, but this team is not as talented across the board as most teams that don't make the playoffs. This has often been the case with Fisher's Titans, so we have to give him credit. The sim does not like him though because he is the one NFL personality whose impact seems to transcend the stats.

Most Exploitable Weakness: Passing Offense - This is not to say that the running game is good, but the passing offense is really bad. Vince Young can be a dynamic player, but he does not have the weapons to maximize his throwing potential. Mike Williams, Alge Crumpler, Justin McCareins and Lavell Hawkins are not the answer. Maybe it's Biren Ealy.

Possible Fantasy Sleeper: Kyle Vanden Bosch, DE - The offense is not really exciting, so let's look at a defensive player. Vanden Bosch had a great year with 12 sacks in 2007. Now, without Antwan Odom and Travis LaBoy, 2008 could head in many directions. He has the motor, the money and the opportunity to have another great year. Jevon Kearse, Albert Haynesworth and Bryce Fisher may pick up some of Odom and LaBoy's sacks, but Vanden Bosch will do most of the QB hunting and see his tackles go up.

Closest Game: @ Baltimore (Week 6) - What games aren't close? The Titans are between a 30%-60% favorite in 13 of 16 games. At Baltimore, Tennessee is almost in a perfect statistical tie with the Ravens.

Houston is the Tampa Bay Rays of the NFL. No matter how much better or more promising they get, they always have to contend with a couple of great teams at the top of the division. It does not appear to be 2008, but the Texans could be nearing a 2008 Rays-like breakthrough. The Texans average 21.3 points per game (#23) and allow 24.6 points (#20) against a schedule featuring eight games against 2007 playoff teams.

Most Significant Newcomer: Antwaun Molden, CB - This is a very tough debate. The answer should come from the group of Molden, RB Chris Brown, RB Steve Slaton, CB Jacque Reeves and OL Duane Brown. Reeves and Chris Brown have experience starting recently, but Chris Brown is too injury-prone and Reeves will not help the team create turnovers. Molden seems like the best bet. He will not likely start, but he fits a need and be able to make some plays in the defensive backfield. Expect around 25 tackles and two interceptions.

Biggest Strength: Young Cornerstones of the Defense - Mario Williams, Amobi Okoye and DeMeco Ryans may be a better way to phrase that.

Most Exploitable Weakness: Pass Defense - When Williams is not standing above the quarterback after one of 16 sacks, that quarterback may be picking a part a secondary that gives up too many big plays and lacks the ability to force interceptions.

Possible Fantasy Sleeper: Steve Slaton, RB - Ahman Green, Chris Brown and even Slaton will likely be hurt at some point this season. As the ultra-productive college product who has not yet played in the NFL, Steve Slaton is the most intriguing of the group. The sim has all three backs in the same vicinity with Slaton gaining 632 total yards and scoring five touchdowns. 626 of those yards are on the ground. Don't expect many catches in his career.

Closest Game: Tennessee (Week 15) - With the AFC Wild Card picture wide open, this looks like a game that could keep the winner's playoff hopes alive.

Click here to view a schedule of 2008 NFL previews and see others that have been posted. Other previews on ArmchairGM are:

Whatifsports.com specializes in answering the great “What if?” questions in sports by simulating games between historical teams and has exciting simulation games for MLB, NBA, NFL, NHL, college basketball and college football.

For more of Whatifsports.com's content, please visit Beyond the Box Score.

Retrieved from "https://armchairgm.fandom.com/wiki/Article:AFC_South_Predictions_-_Colts_Still_the_Team_to_Beat?oldid=125298"
Community content is available under CC-BY-SA unless otherwise noted.