I don't know much about J.J. Redick the person outside of basketball. He could be the friendliest person, most loyal friend, and caring son for all i know. All I do know is that the first time I watched him play basketball for Duke, I decided that I did not like him and that he in fact "Sucked". What was my basis? I'm not sure—there is just something about him. Apparently, I am not alone. A google search "JJ Redick Sucks" returns 217 matches. Let's try to breakdown why everyone hates him.

8) He's listed at 6-4 190 lbs. Not much taller or stronger than us. Why couldn't We do this in college? Oh because we drank and played video games all day. Right.

6) Everyone loves Adam Morrison because of his butt stache and floppy hair. He looks like a mess. JJ is clean cut and handsome. Note: I am not gay (not that there's anything wrong with that), but am totally comfortable saying that.

5) Miss some F'in threes already! Or a foul shot or two! 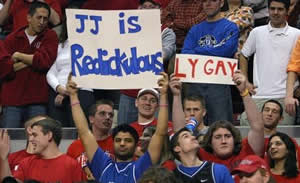 3) The cocky smirk he sometimes sports after draining some 3's

2) He's not from Jersey City

1) The thought of how much tail he pulled at Duke over 4 years is simply nauseating.

No matter how many times we fans say "JJ Redick Sucks", its hard to argue how good he is. Redick is one of the leading contenders for player of the year, averaging 27.2 points for one of the best teams in the country. He's shooting better than 46 percent from the field—which is more impressive considering half his shots are from behind the arc. He also broke the All-time NCAA record for three pointers. As a senior, he will lead his Duke team into the Sweet 16 for his final shot at a National Championship. In each of Duke's exits from the NCAA Tournament over the last 3 years, Redick has had awful shooting performances. Normally, he thrives and succeeds over pressure and being heavily guarded. Redick has something to prove, and he will come out firing. Even if Duke loses, Redick will definitely wear a jersey for an NBA team next year. Then maybe we won't hate him as much.

Retrieved from "https://armchairgm.fandom.com/wiki/10_Reasons_Why_You_Hate_JJ_Redick?oldid=173328"
Community content is available under CC-BY-SA unless otherwise noted.